In the midst of writing my Master’s thesis, I read an article in the Daily Illini about a new program called “Fun Flights.” Consisting of either a half-hour or hour long flight, this program gave residents of and visitors to the Central Illinois area — and particularly the U of I campus community — a view of the plains from above. The flights were offered in the fall 2009 semester (I missed the memo), but because of time constraints in the spring, I couldn’t make it either of the two Saturdays the flights were offered. I asked if it’d still be possible to do a flight in the summer sometime, and three days after I got back from the National Parks tour, I got the opportunity to experience my final taste of my pending bittersweet departure from the community that has proven to be a worthy chapter in my life. I was fortunate to get Mike Stein to ride along with me.

I’ve always been a big fan of airplanes, but suffice to say I like big planes; I’m not quite as comfortable in small ones. That the air was heavy that day and that there were some mild gusts of wind didn’t help ease my nerves, but soon, we were heading over Assembly Hall and Memorial Stadium. On a side note: I was watching a Nissan commercial on TV recently and noticed that the song they used as the background was one of the football team’s warmup songs. Cue college gameday nostalgia!

It wasn’t long before we flew over the Bardeen Quad. From the air, it looks more like “Engineering Row.”

Of great surprise (sarcasm), thirty minutes is a decent amount of time to view the campus from the air, and we began to loop back around. (It was a smooth flight; kudos to Luke Karcher for doing a great job of keeping my mild motion sickness at bay. I even enjoyed the “floatie” he performed for us, even though once was quite enough for me.) Anyhow. Demolition had apparently started on the Six Pack — I hadn’t noticed this when I was on the ground! 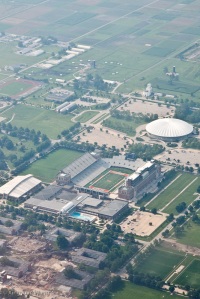 And that was it. Six years in one of the world’s preeminent institutions flashed before my eyes in a half hour. At one of the four high school awards ceremonies for which I was in pit band, one of the songs sung in commemoration of the seniors was “There’s a Kid Inside” — and this flight, along with other various and seemingly random flashbacks since then — showcased exactly what Barry Manilow (yeah, I know, but the song itself reminds me of high school, so back off, okay? :p) meant by

“Something rings the bell, \
Any thing at all, \
All it takes is a slam of a locker. \
Or the switch from summer or fall, \
A change of season seems barely reason, \
But there he goes, he’s there again.”

Above the stalks of corn

2 thoughts on “Above the stalks of corn”