The third (and sadly last) city on the trip was Prague. It was suggested by various friends, and I thought it’d make a good final stop given its proximity to Salzburg and Germany, so we drove there on a Thursday night and spent the next three days in the Czech Republic.

First impression of the city: holy cow is it touristy. Another friend had visited the week before and mentioned this, but having seen the number of “hikers” in Zermatt and Lucerne, I shrugged it off as a mild exaggeration. (“All of Europe is touristy in the summer,” I thought, “so this can’t be much worse.”) Wrong! Instead of being a mild exaggeration, it turned out to be a decided understatement. I think I saw more tourists at the castle (Pražský hrad in Czech) at 11 AM than I had seen at the Salzburg castle at any point during the day.  Lots of tourists and lots of engaged couples getting their pictures taken. Lots (and lots and lots) of those, actually. I think I ended up with 18 pictures of Prague and 3402 pictures of engaged or married couples, complete with wedding photographer. 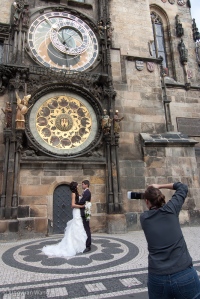 Second observation: Prague also has very steep, very fast-moving escalators leading to the subway platforms, which were apparently built as a form of shelter. Maybe this need for urgent use explains the escalator speed, too? 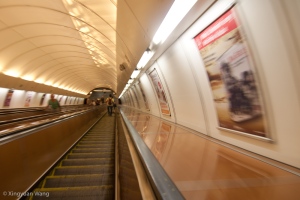 At the end of the first day, after Brian and I had visited the castle and roughly all of Malá Strana (nota bene: I just noticed that my first picture in this post is almost identical to the one in the Wikipedia article about Malá Strana! wtf!). The sunset that day looked really promising for a second (uh, pretend there’s much more red / orange on the buildings to the left of the photo below), but wrong again! After walking back to the Charles Bridge, it became disappointingly apparent that there were many clouds in the way of the setting sun. Screw the crappy photos — so much for my professed ability to predict good sunsets! 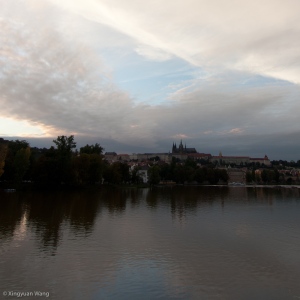 For dinner, a friend had recommended Restaurace Bredovský Dvůr, which to this day remains my favorite restaurant… ever. The frequenters of the place are locals, the beer is extremely fresh, and the food is delicious and very reasonably priced: the pork knee that I ordered was probably about 1 kg and cost the equivalent of 8 €. Try getting that quantity of food for that price in Germany, let alone Norway. (While searching for the restaurant link for this post, I came across this blog post — but let me share my interpretation: the service here was no less lackadaisical than I’ve found in any other European country (except perhaps France).) It was also delicious… and I finished the whole thing by myself. I think that action upset my stomach the next day, but who cares about the long-term, right? Just make decisions that make money in the interim and let future generations figure out the mess fill the stomach and sleep off any potential stomachaches.

The next day, two of the other trainees currently in Stuttgart met up with us for the rest of the weekend and we hit Old Town (Staré Město) and New Town (Nové Město), where we saw the Franz Kafka statue, some guns, and really impressive driving. I could use some of them latter skills. 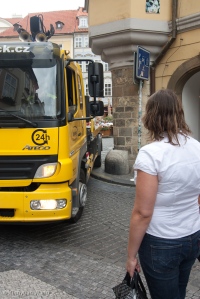 We continued to walk around the city, but by dinner the protein gluttony of the night before had rendered my stomach incapable of really accepting any more food or drink… so I managed to miss what proved to be an awesome, typically-Prague night with the trainees who arrived the day before. Unfortunate. Knowing that I’d get more sleep than I had intended, I set my alarm for 4:30 AM, hoping to catch the sunrise. (I was back onto thinking that I could, in fact, predict sunrises with no knowledge of the weather forecast.) The problem was that I set my alarm for 4:30 AM for the following weekend, so as expected I missed another sunrise. Luckily, I woke up naturally just before 7 AM — early enough to see the lingering color in the sky I hoped might be there — and decided after trying for a moment to fall asleep to head out to the city “before all the tourists arrived.” Well… only partially successful. By 7:15 AM, the subway was pretty full (on a Sunday!) and the first tour groups and early-bird photographers were already roaming the Charles Bridge. Still, it wasn’t that bad, and there was much of the city that was quite deserted. 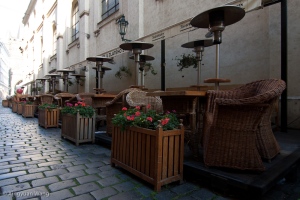 The goal of my early morning jaunt was to visit the Dancing House. For all our wandering through Prague, we had managed to come within a block of Frank Gehry’s famed design a few times but never actually to it. This time I followed the river all the way to the Jiráskův Bridge and stopped for a few photos of the house. On the way there, I saw an interesting bench design… not sure what to make of it.

I actually wanted to see if I could go inside the house, but I was so busy trying to get shots of the exterior from “new” perspectives that I ran out of time. 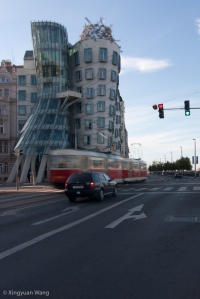 So this thing with new perspectives. Well. *clears throat* People in the Marching Illini of past years may remember a certain “photographer” (more accurate noun: Asian) who would climb on the walls outside of the Education Building to take “aerial” pictures of the band while they marched back from the Stadium after football games. This would be me (oh — and once I also stood on a parking meter to take photos of the group). I figured most everything in Prague has been shot at some point, but seeing a vertical post on the corner of the street and the bridge, I climbed up on it solely in hopes that no one else has this precise shot. The photo is nothing spectacular and is hardly different from the ground-level vantage point, but at least I probably won’t find too many others on the internet who have done the same thing. Two days before, I climbed on the railing of the Charles Bridge to take an “aerial” photo, and I’m positive that a photo of me in that position exists on someone’s memory stick; I saw the guy point his camera at me while I was up there. His caption probably reads, “Ha those Asian photographers.”

And after that, I went back to the hotel to get breakfast and visit another Czech castle that doesn’t allow photography. The Prague trip was largely satisfying and successful in that I got to see the entire city, but I feel it was a very… cursory examination and not really detailed. There is a ton of architecture in Prague (even ignoring the obvious works), and it’d be neat to go back some time to explore that.

It’d also be nice to go back with other photographers interested in taking their time and not just at tourist stops. Again, I’m not disappointed at how much I saw — it was great to be able to see all the sights — I ran into some members of a Bryan Peterson workshop, and while too expensive for me to consider soon, the opportunity to talk shop with others who share the same interest is invaluable. It’s why I met with Danny Seidman and Joshua Lee in Seattle this year and Helge in Tromsø. Prague would certainly be another opportunity, and its subjects are worth another go. (I was going to use “shot” in place of “go” for precision, but I wanted more to avoid the pun.)

Although I missed out on yet another sunrise, the biggest distinction about my time in Prague is that it’s really the end of the Big Trips. The next blog post (due out tomorrow or Tuesday) will cover the Frankfurt Motor Show, but the point of this last paragraph is that the travel maelstrom that commenced innocently enough with Venice ended nearly two months afterward in Prague. It’s been intense; among the 30+ GB of photos I now have of the last two months, my sanity, sleep schedule, money in my bank account, and time dedicated to learning German have all been left by the wayside. The motion blur I put into three of the photos above (and the next) wasn’t done at the time to illustrate this point; I was experimenting with what the results would be and like them more than their static cousins.

The thing is, they do represent — cornyily, in the true-to-form nature of this blog — the blur that my schedule has been (and become). Today was the first chance I’ve had since July to clean up old papers and receipts lying around the apartment and to cook a decent meal. I love traveling and changes of pace (I’m a rotational program! I expected those), but every once in a while I have to admit it’s nice to slow down and take a deep breath. Or two. In the meantime, there will still be blog posts and confusing morsels of my psyche to be analyzed here, so see you again soon. Don’t go away! :-)

One thought on “Meat and tourists”