As was the case with Norway, the motivation to go to Switzerland again did not come strictly from my own head. The idea to flee Germany instead came first as a passing reflection on the weather forecast, but it wasn’t until I had seen and then reconsidered a few other NWHikers.net threads (and in particular this one) that I decided resolutely to go. It took me five days to make up my mind and reserve a room, but I largely used that time to figure out what I’d do. Considering the amount of time Brian and I had in the area at the beginning of September, I think what we did was perfect… we got to hike a bit and see some of the most majestic viewpoints without feeling “rushed” to only see the highlights with no real appreciation for the area. With two and a half days in the area this time, I could slow down a bit and look into venturing a bit further astray.

The first hike I did (Schynige Platte to First via Bachalpsee and Faulhorn) was one of the most memorable hikes I’ve done. There weren’t many people on the train from Lauterbrunnen to Wilderswil at 6:30 AM, but the cogwheel train from Wilderswil to Schynige Platte was packed — they had to get a second train to meet capacity. It was clear why so many people visited this area once I arrived at Schynige Platte: the views there are spectacular. Not to say that views from elsewhere aren’t impressive; the difference is that from most places, such as Kleine Scheidegg, it’s usually only possible to see Eiger, Mönch, or Jungfrau:

From Schynige Platte, the Alps as a chain of mountains are fully visible. The deep valleys leading up to the mountains were also breathtaking in person and a stark contrast to the rising rock beyond.

Throughout the hike, I saw a lot of jet contrails — a favorite sight of mine — and wondered if the passengers in the jets were looking down on the Alps and thinking the same things as I was while looking at them head-on. What an incredible view the Alps must be from 34,000 feet. 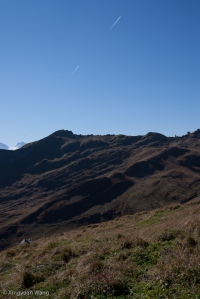 One of the most popular attractions near the First gondola station is Bachalpsee. There are actually two bodies of water there, but it’s a little known fact that Absinthe is actually harvested in Switzerland from this exact lake!

I arrived at First after about five hours (with breakfast, lunch, and lake photography breaks totaling an hour or so); from there, I took the gondola down to Grindelwald. It was late enough that I didn’t have time to fit in another full hike but still too early to start looking for places to eat, so I started planning the next day instead. My brainstorming session lasted probably an hour, but eventually I left Grindelwald and went to Kleine Scheidegg to begin my trip back to Lauterbrunnen. Grindelwald sits at the foot of Eiger — what I would give to be able to live in houses in this region!

Fall colors had just started to emerge… I miss this time of year back in the States, so it was nice to see some of those colors in Switzerland.

I had not intended to stop in Wengen on the way back, but as the train pulled in, the golden hour began to light up Jungfrau. Incredulous, I hopped off. 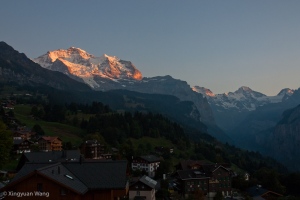 I always find fascinating the different people I meet while touristing. In Wengen, I met an Ikea logistics planner and his girlfriend, a buyer for an organic produce store. Both jobs sounded incredibly interesting — and their exploits, did, too: they were just coming off a four-week European excursion that covered nearly every country on my own list in addition to several others. The world has become such a small place, and yet the primary reason I met them is that I decided to get off the train at Wengen rather than continue directly to Lauterbrunnen.

I decided after much deliberation that I’d try to return to Kleine Scheidegg to catch the sunrise on the second day and play it by ear after that. Unfortunately, I failed to notice that Kleine Scheidegg doesn’t actually get the morning sun. Given the [travel logistics] impracticality of trying to hit Bachalpsee for a genuine sunrise or sunset and that I really wanted to see the lake with calm water, I decided to take the first train from Kleine Scheidegg to Grindelwald and go back to Bachalpsee rather than hike at the foot of the Eiger. I think the decision was a good one. I was one of the first few to get to the lake, and the water stayed calm for long enough, if just barely: the winds had picked up in the twenty minutes I was there, and the lake surface became as choppy as it was the day before. 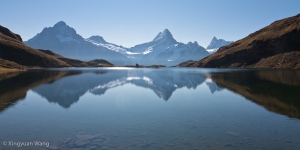 After the gondola ride back to Grindelwald, I was first unimpressed by what were literally flowers in the sun (play on words: sunflowers), but then it occurred to me that maybe I could do something with this.

Also landing in Grindelwald around the time of my arrival there were paragliders. I didn’t want to shell out the money, but this looked like an awesome experience.

I ended the second day at Kleine Scheidegg to eat a quick dinner and to set up my tripod for sunset. I felt pretty alone as I watched the last train leave Kleine Scheidegg and the sun set on the mountains; though I wouldn’t be staying long (golden hour doesn’t last a full hour), I would have a decent hike down to Wengen in the dark by myself. Still, it was pretty invigorating to have literally no one between me and the mountains. ;-) Without clouds to catch color in the sky, the sunset wasn’t as colorful as it could have been, but I was hardly disappointed. This area is simply breathtaking. 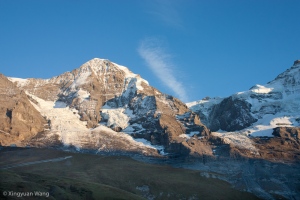 I decided to take the last day extremely easy: I intended to do no hiking at all. Fortunately, the Alps caters to that activity level, too. The Schilthorn visitor center is accessible by cable car and offers a great view of the Alps (here, too, as a chain and not just glimpses of individual peaks), though by now it had dawned on me that there is no bad place to view the Alps. Practically everywhere I turned was another jaw-dropper. 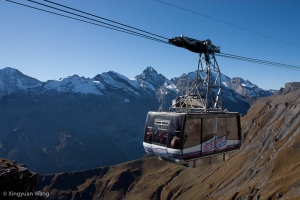 I have absolutely no idea how to close this (no kidding: this is the sixth redo of my original paragraph). It’s probably because I’m a bit unsettled because of how much the Alps have grown on me; while I went to Rainier more frequently in 2007 (seven times in five weeks) than I have the Alps (three in seven weeks), there’s no doubt that I’m still quite smitten with these European peaks. All I do know is that those first three days in October were finally a return to the early-morning and late-night photography I’ve been wanting to do the whole time I’ve been in Europe, and I don’t think I could have chosen three better days to do it. The only thing to top this would be to go back for winter sunrise and sunset photography… ;-)