I felt that my trip to Dachau merited its own post. It’s certainly serious enough, and lumping in this post — which is still serious, but on a different level entirely — with that one is a bit insensitive, even for me.

After I learned from my trip to the Mercedes Museum that there is also a Unimog Museum, I went there on Sunday to see the trucks in person. I had first heard of them from my forays into construction equipment, but never gave them much thought. They aren’t as productive as actual construction equipment or as efficient as dedicated on-highway trucks, so I figured they tried to be jacks of too many trades. But if a significant number of European municipalities (and especially those in the Alps) use them , they must have some merit beyond looking awesome.

Unlike the multi-storied, gleaming works of art that are the Porsche and Mercedes castles, the Unimog museum is only one floor and contains mostly older models. It’s a neat site, though, because it’s run completely off revenues it makes and monetary and in-kind donations to the Unimog Museum Association: the company (that is, Unimog and Daimler alike) do not contribute anything to keep the doors open. Oh, and it was also cool to see Bosch components on even older Unimogs. It looks like we have our hands in… everything made by… everyone. :-)

Much of the museum’s displays are written in German, but there is a useful companion guidebook that is in both English and France (and German). I took a little over an hour to go through the inside of the museum — and then I headed outside.

The area right outside the museum is a “test” lot where you can go ride in a Unimog. For 6,50 €, you can sit alongside a volunteer driver — there are over 60 of them — as he or she takes you around the loop. Though none of these obstacles are particularly demanding for the Unimog, I haven’t had a smile that big on my face in a long time, perhaps since the Nürburgring. This is, however, a bit safer and cheaper. And for off-road geeks like myself, much more giddy-inducing. [N.B.: it’s difficult to stress the steepness of these angles. In the photo on the right, the descent grade is only 70% — less than 45° — but when you’re at the bottom, you feel like you are looking straight down at the ground. So many roads and hikes are of such shallow angle that it’s difficult to fathom from a picture just how steep some of these grades are, until you feel like you’re about to fall into the windshield or out of the door.]

Unimog demonstrated their impressive axle travel inside and out. Outside, you do feel every bump — these are designed to be rugged work trucks, not some King Ranch edition of a pickup — and you absolutely feel the lurching. 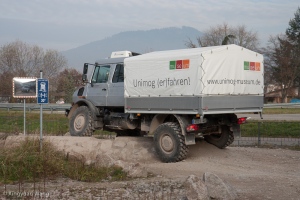 You may be wondering why exactly this is a serious post. I went to go play in a big sandbox, it’d appear at first, and there’s no metaphysical takeaway there. So what gives?

The point is that this is a big sandbox that gives people massive grins. The old are appreciative; the young, mesmerized.

This is technology: here’s a truck with an engine power rating not too much more than that of many midsize sedans but that can ford one meter of water and take a side slope of 38°, all while getting there in reasonable comfort (it beats having to, say, wheelbarrow snow to the Winter Olympics due to a lack of natural snow — note: link is a pdf). If this type of exhibit can get people interested in engineering — or heck, take it a step back: in education — then the museum has already succeeded. The fault of the educational system in the US can at times be attributed to certain schools and teachers, but arguably there is a lack of natural curiosity about the world we live in. There’s a sentiment that we don’t need to understand the whys and hows, that mere acceptance of functionality is sufficient. This doesn’t apply to engineering concepts alone, either — it applies to general hobbies like reading or having healthy conversations with friends. The people who built the Unimogs, the Boeings — none of them thought that a normal tractor or a boat would be good enough. They pushed beyond the conventional envelope, asked “What if…”, and gave us something that now defines a certain way of life. We don’t need to point our fingers only at the Department of Education or the local high school principal for failing to teach our children. Maybe we as a society need to help provide sources of motivation that we so eagerly want to see our children possess. I’m not pushing an agenda but am rather saying that the Unimog Museum was refreshing because I saw people be inspired by technology again. Does that happen to students leaving a classroom? Every person who came out of that truck had a smile on her or his face. Every. one. For me personally, given that the Unimog Museum made me smile the whole time I was there, I’d say it succeeded.

Aside: Unimog is actually an abbreviation. It stands for “Universal Motor Gërat,” which is akin to a mobile power unit.