In the last year, I’ve been fortunate to fly on four planes I never figured I’d take: N777UA, the 747-8I, the 777-300ER, and, this year, the 787. Over a decade separates the first flight of the 777 from that of the 787, and although the two might look alike at first glance, it’s surprising how little the new plane seems to differ to the unsuspecting passenger. After all — a widebody is a widebody, right? 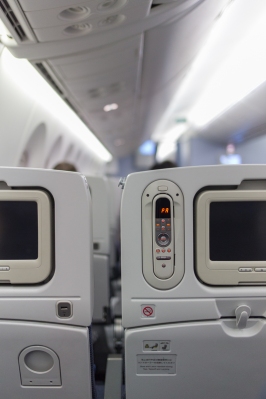 Let me take a step back. I wanted to take advantage of the Easter weekend, and a few days after the trip to Savannah, I started looking at flights to rather unlikely destinations. Most required significant planning for such a short trip, so either due to flight cost or lack of preparation I ruled most out quickly. Except one. I had been there before…

The flight to Singapore began quietly. Charlotte-Douglas is silent at 5 AM, and even coffee stands are not yet open at this time. The entire airport was deserted. 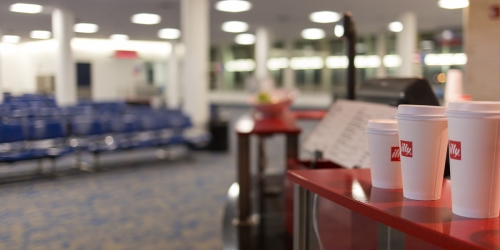 On the flight over, I chatted with some of the flight attendants to see what they thought of the 777. They liked the width of the cabin and the accessibility of the galleys. Those on the 787 are cramped by comparison. They lamented flying certain routes because of rude passengers. Apparently, one woman asked one of the stewardesses to pick the skin off the grapes she was eating. Her response was simply professional: “My hands aren’t clean enough to handle grape skin at the moment, but let me get you some tissues.”

I had always thought that Frankfurt was the Land of the Widebody, but I’ve begun to learn that Asian airports fulfill that description equally, if not more so. All Nippon Airways has over 50 777s alone, though my final leg from Tokyo to Singapore would be on their 787 product. How fortuitous! Even though they were the launch customer of the Dreamliner, I was surprised to find out they already had 23 delivered; I had suspected fewer. At Tokyo-Narita, support vehicles were parked neatly near the planes, and even the jetways were retracted and parked in designated spots after use. For this flight, we skipped the jetway and boarded via a stair truck, giving me the opportunity to get at least a little close — but not too close! — to one of the Rolls-Royces powering the bird. 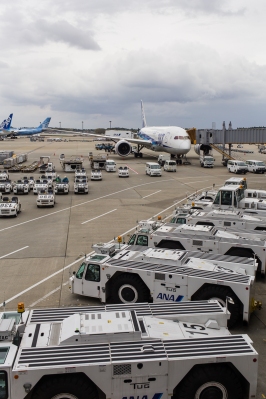 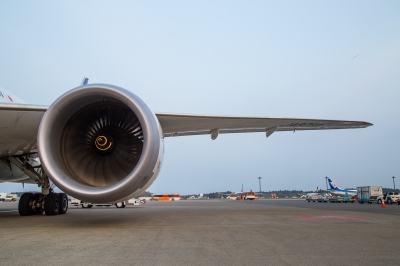 The flight over to Tokyo was in perpetual daylight, so I used the flight to Singapore to pass out. No worries: ANA’s movie selection wasn’t great, though they have great meals and an extremely polite cabin crew — one rivaling Singapore Airlines’ in my experience. My flight back to Tokyo was also on a 787, so  I decided I’d use that to explore the plane more.

I managed to avoid jetlag for a rather short stay in Singapore and left Changi for Narita around 6 AM on a Monday. Economy was nearly empty — the people in my cabin would have fit in two rows and the entirety of the economy passengers that flight would have fit in two-thirds of one cabin. Apparently this was a new flight and hadn’t yet reached high load factors. 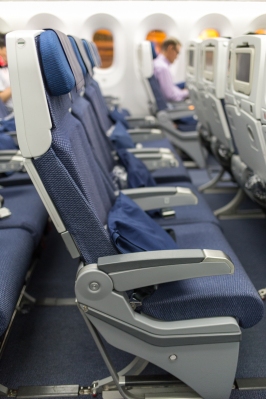 Almost immediately after takeoff, I was treated to sunrise. Breaking out of the clouds, we flew east and I watched the sky turn on. One thing I don’t like about the 787 windows: they have two panes of glass with a 2″ gap between them, making it very difficult to shoot dark scenes outside when the cabin lights are on. Because the windows darken electrochromically, they can also have an odd color tint. With a sunrise practically to myself and that majestic wing, though, all is forgiven. This is the way to spend a morning. 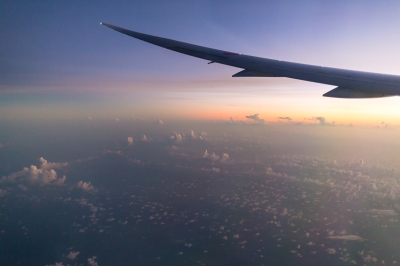 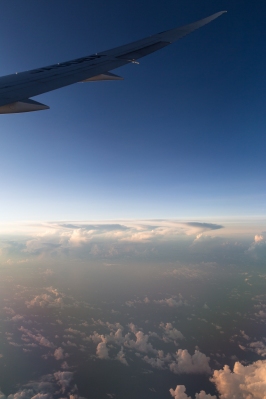 One flight attendant noticed my child-in-candy-store stares around the plane and we chatted for a little bit. The lower cabin pressurization or higher humidity seemed noticeable (though very subtly), and the cabin was well-lit and comfortable. ANA flies a 2-4-2 seating arrangement which helps; the 3-3-3 configuration most airlines choose would narrow the aisles. She asked if I minded the seats that don’t recline (rather, the seat pad slides forward): at my height, neither one causes discomfort. (Taller passengers might prefer being able to lean back, though.) The rear galley was fine for serving but the front galley for economy would be cramped — except for this flight, which with probably only 60 economy passengers was sufficient. Friendly flight attendants are the best, even if I didn’t get a personal light show!

I lost track of time on my flight back to the US, but some dozen or so hours later, I was seeing my second sunrise. Unlike the first, which roared to life in a sea of orange and red after climbing out of the clouds, this one crescendoed gradually — my favorite. I was probably one of the few passengers awake, but seeing the GE90 peeking out under that wing… the 777 is a beautiful bird as it is but this silhouetted giant made my morning. Both of them. Or however that freaky two-sunrises-in-one-calendar-date thing works. 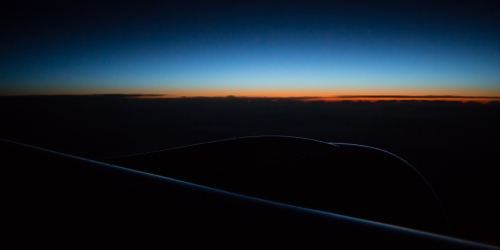 I was worried that my autofocus sensor wouldn’t be able to lock onto the frost on my window, but the 6D’s autofocus ability astounded me — I never had the camera miss focus on any of these shots. And I had just written that the human eye is incredible! 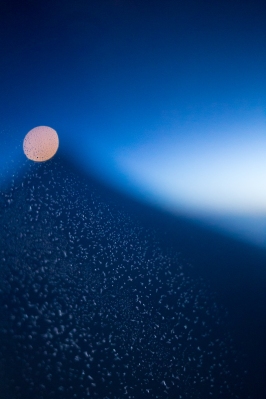 As the elderly United 777 (ex-Continental) touched down on American tarmac, I contemplated the differences between the two birds. The 777 continues to be a tour-de-force in the commercial aviation world. It’s the best-selling widebody twinjet ever, was the pioneer for CAD at Boeing, and it continues to make money with the world’s airlines. Some find that universal goody-two-shoesness boring or mediocre or bland, but it runs well, passengers like it, and crews respect it. Even for an airframe that’s commercially 20 years old next year, that’s extremely impressive. It’s the only Boeing jet in production to use a blade tail cone: it reduces ingestion of liquids into the auxiliary power unit and also reduces drag — and it’s distinctive. In a word, the 777 is a stalwart. It was designed right and the results reflect the project management.

The 787 was meant to be the continuation of the 777 legacy. In 2007, it was unveiled to the world but only as a shell: the interior was unfinished, the engines not operational. It took four more long years for the plane to complete its first revenue flight but suffered a mandated fleetwide grounding not long thereafter. Over two years have since passed, and its dispatch reliability is not yet above 99%. The plane is comfortable, quiet, and pretty awesome — the passenger appeal is definitely there — but it still feels a bit immature; not quite honed or polished. As I was waiting for a flight in Tokyo, I saw what is bound to be a common sight in the future: a 787 and 777 next to each other. What was peculiar about this particular shot is the planes and their operators: United Airlines, here with one of its 787s, was the launch customer of the 777, and ANA, here with one of its 777s, was the launch customer for the 787. This brought a strange peace to me. Even as the 787 begins its run on the world’s airways, the 777 continues to be that outstanding engineering symphony. 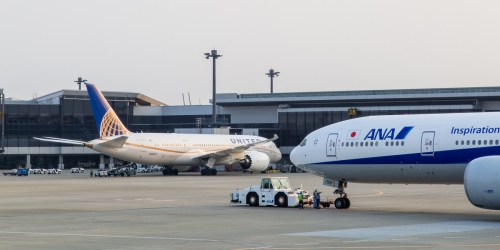 Make no mistake. The 787 is not a step backward — particularly not as the worldwide fleet matures — but that tailcone doesn’t quite do the 777 family lineage justice, eh?

A Tale of Tails