It’s flat in Charleston, but 300 miles to the west-northwest is a string of mountains whose name I still haven’t fully figured out: the Great Blue Smoky Ridge Appalachian Mountains. Among them is one of the few fee-free National Parks: the Great Smoky Mountains National Park. I have been there before, but never for watching synchronous fireflies; in fact, I had never even heard of the phenomenon until the Meetup event was posted.

Weekend camping trips wear me out, and in such fashion this one started off with wandering into the wilderness before I had a chance to eat dinner. None of us on the Meetup event expected a grand show, as the National Park site claimed the following weekend would be the better start to the firefly extravaganza, but a few members had seen some bugs the night before. We settled down regardless to watch a lone visitor light up and fly away. 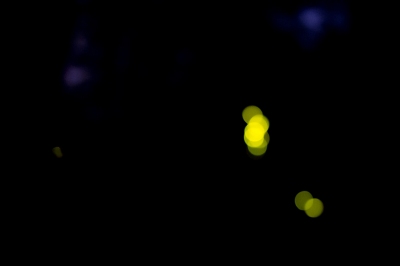 In addition to not eating dinner, I also not brought my tripod on Friday night — leaving much to be desired in the way of motion blur. On the second night, I finally got some of the long exposures I had been seeking. Like the previous night, there wasn’t much traffic initially…

… but by 10 PM, the trail and bushes were positively aglow. I’m not totally clear how fireflies know when (or how) to synchronize their flashes, but it was pretty neat. They were flighty and not numerous, but they still drew our “ooohs” and “aaahs.”

We were also visited by a little crawly thing. With further research afterwards, we determined that this was a glowworm beetle — the females evidently remain like larvae. This particular one held our attention for quite some time as we had no idea what it was at the time.

In between light shows, a few of us went hiking during the day. My preference is always to gain elevation during hikes, so we tackled the Chimney Tops trail. It was marked as strenuous, but I’d prefer to call it unnerving: neither the elevation gain nor the length is of significant challenge (my benchmark is still the Paradise-Muir slog), but at the end of the hike is a scramble. Following the officially-posted sign means crawling up a ~175 foot exposed face. It’s not challenging — handholds and footholds are plenty and strong — but compared to the rest of the hike, it’s an abrupt deviation. I was admittedly relieved to descend and sit by whooshing streams as we made our way back down to the trailhead.

One frustration of the Appalachians is that the weather changes quickly. On Friday night, I predicted that Saturday morning should be good conditions for a sunrise. It turns out I was right; the sky was cloud-free until 11 AM. Tired from the drive and lack of dinner, however, I decided to postpone sunrise plans to Sunday morning, which according to the day’s forecast was supposed to be the better weather of the two days anyhow. By lunch Saturday, though, clouds had begun to form over Clingman’s Dome. This was supposed to be my sunrise spot for Sunday morning! 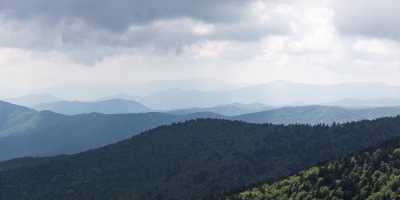 When I awoke at 5 AM Sunday, everything from Newfound Gap to Clingman’s Dome was fogged in. I napped through sunrise at 6,600 feet and was only able to catch a glimpse of what would otherwise have been beautiful light if not for the clouds obscuring my view. 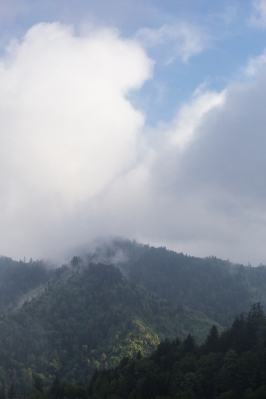 As I headed back down to the campsite to break camp, there was a string of photographers lined up along the side of the road: they were taking pictures of what I had seen minutes ago but from a different vantage point. A frustration of weekend trips to the Smokies is that I’m typically in a rush to get back to Charleston, so I blew off another opportunity for a sunrise to pack my tent and campsite instead. I took that as a tradeoff for getting to see some elk (I think — judging by the short tail) by the side of the Blue Ridge Parkway. One seemed particularly happy to be gnawing at the trees.

As I drove back to the Lowcountry, it dawned on me that I’ve been extremely lucky with the weather and conditions I have had in the Appalachians — no real issues with rain ruining plans, and generally fantastic weather for hiking and firefly observations. We even beat the crowds for this firefly thing; when the fireflies are in full force, it gets busy at Elkmont. As I passed by Newfound Gap for the third time in less than 24 hours, I snapped a picture of a road leading into a grey unknown. This is no Alps, the road is no Furkastraße, and the mountain is no Rainier, but elevation aside there’s something pleasantly soulful about this veiled National Park. 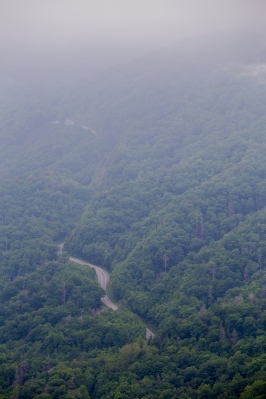 Essence of the Smokies

3 thoughts on “Essence of the Smokies”