One might conclude from the last several blog posts that there are no mountains, or possibly even no life, in southern Germany, but this would be false. The mountains here are as rugged as any I’ve hiked — I’ve just been sitting on the photos for some time.

While I admit that I haven’t been outdoorsying around here as much as I’d like, it’s been a fairly active year. I went skiing here three times this year, the last in late March. That was followed by Scotland, a trip to bauma, and then a friend’s wedding in the US. Not long thereafter was China. June didn’t bring much good weather so I only hiked three times after work to start getting ready for Switzerland, but we had two really good weekends in July before I crossed the border. The first such weekend I had a late start and decided on a tour of some mountains along the Gunzesrieder Tal.

The first one was the Mittag, which on a gorgeous Sunday was rather crowded. I had also been here before, so gawked only a short bit at the taller mountains to the south before heading off toward them. The next summit — Steineberg — was about an hour away, and a hot climb up a ladder brought the reward of even better southerly views. The trail continued to the Stuiben, my destination for the day. I was over 1700 m above Charleston, but it might as well have been Charleston there: it was easily still 85 °F there with hardly a gust of wind. Hiking back down to a cold Weizen was a welcome relief at the end of the day. This certainly wasn’t the only photo I took, but all the photos I took were at summits and consequently resembled one another. 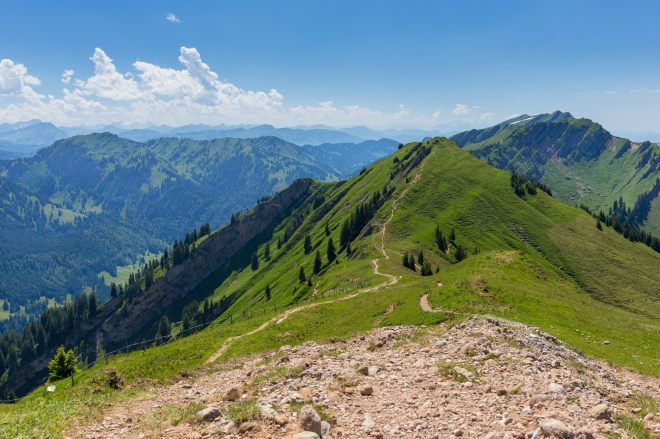 By this time, I should have realized that I really needed to hike with my camera out rather than packed, but the following weekend I repeated the mistake and kept the camera in the bag again. This would be an invalid excuse for cost savings even if shooting film, but I’m not sure what I have been thinking the past few years with not keeping it handy while underway. The next weekend, a few friends and I hiked a trio of pre-Alps near the Rubihorn, again with my camera packed most of the way. The first one was Schnippenkopf, which boasts terrific views of the Bavarian Alps to the east and the Illertal (Iller [River] Valley) to the northwest. I should have brought a longer lens with me, but in addition to the laziness of hiking with the camera set aside, I was also hiking with a humongous 35 mm f/2 prime, which didn’t really do Sonthofen much justice. But this is the Allgäu: an indescribable network of valleys, bloody steep mountains, and breweries and traditions that pre-date the United States as we know it today.

From the Köpfle trio (the next two are the Heidelbeerkopf and the well-known Sonnenkopf), it’s also possible initially to look west. Pretty much smack-dab in the middle of this photo is the Hohe* Ifen, the fancy-looking mountain whose ascent appears as a flat slope running up to a unremarkable summit.

And then I went to Switzerland for a week. After coming back with the newfound common sense to keep my camera out while hiking, the weather looked terrific again. There’s not a lot of tall mountains here that people can walk up; quite a few require some head for heights and many more yet require hands and feet. The Hohe Ifen is not one of those, so I decided I’d give it a shot. Seen from up close, the Ifen is not nearly as smooth and homogenous as it appears from afar. Instead of a gradual sloping roof, its sides are a crushed, jagged mess.

The trail leading up from the valley is a series of switchbacks on a rather steep slope, but it’s also extremely well-marked from the thousands of feet that descend upon it on a nice summer day.

Looking back toward the valley, the view seems a bit smothered, but rapid heartbeats and the tiny dots for people tell a different story. The heartbeat may also be attributed to the breathtaking view, however. 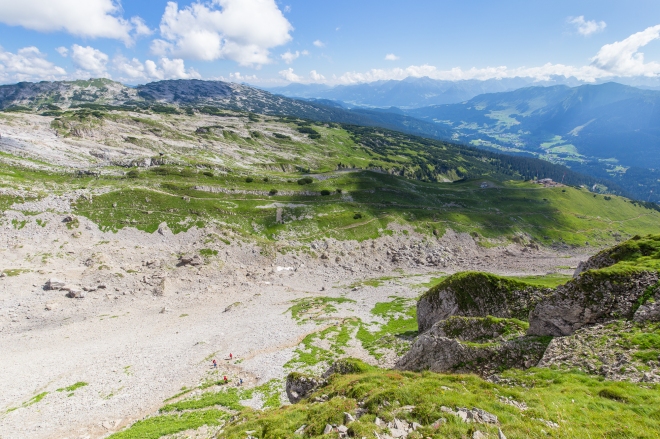 In mountaineering, there’s a term called a “false summit” that means that a certain feature appears to be the highest point of a massif but is actually not. Hiking up the switchbacks of the Hohe Ifen culminate in ascending a col (or a saddle) that appears to be near the summit, but the actual summit is still a half hour’s walk uphill. This isn’t so much a false summit so much as it is a deceiving end to the switchbacks.

Deceiving though this ridge is, the views to the south are absolutely transfixing. If 4000 m peaks are the peak-bagger’s delight in Zermatt, 2500 m peaks are their equivalent in Germany. The Widderstein is an extremely well-known 2500er, and from the Hohem* Ifen it seems just an arm length away. (It’s the Jabba the Hut looking mountain to the left in the photo.)

I wandered around the broad slopes for probably twenty minutes before continuing uphill. By this point, I had passed a father and his soon a good ten times while hiking, with them then passing me while I was stationary with the camera. The loose-footed trudge up the shingly gravel was a bit slower going, but the green grass for which this region is famous was an expressway to the top of Hoher* Ifen. 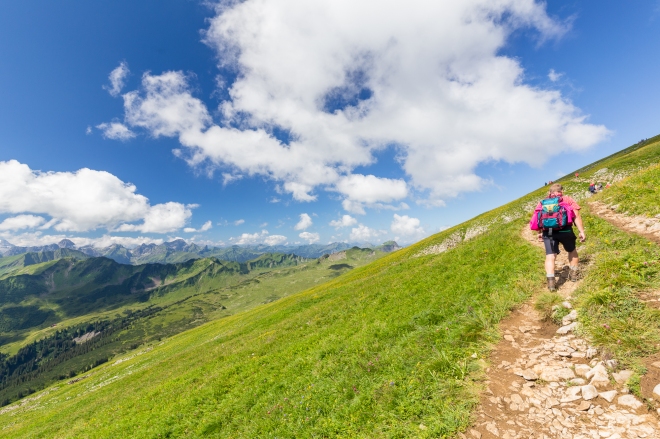 And it was positively rush hour on the expressway. Probably four dozen people were milling about at the summit. Some were families, some were couples, some were in a hiking group, I was alone. The views continued to be astounding, so I ate lunch and took it all in. 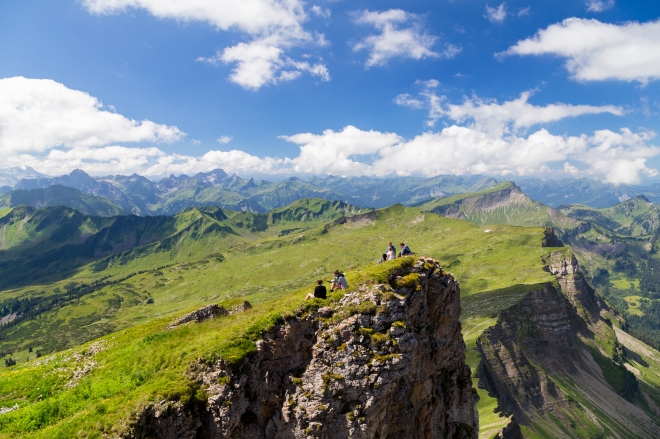 When I first resumed hiking last year, gaining 1200 m elevation in a day was a big enough deal for me that I’d be worn out by the end of the slog. This year, 1200 m comes a lot faster, so I decided I’d add onto the journey by heading down the Ifen and then picking up the trail to Hahnenköpfle, only 100 m shorter than the Ifen but seemingly dwarfed by its massive, squatting neighbor. Here, the views to the Gottesackerplateau — looking completely unlike anything else in this area — were unparalleled. The entire landscape looked as if a sinkhole the size of a small city had suddenly devoured the mountains above it, then dried with the ground half-digested. 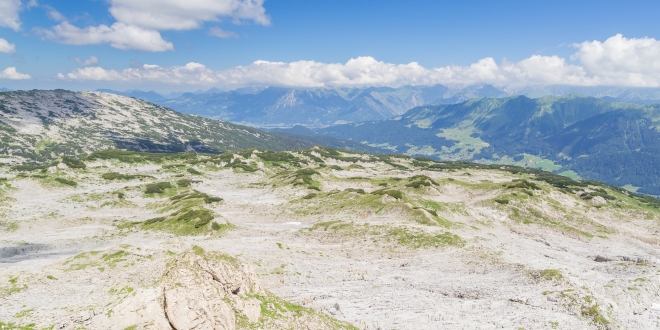 The exposure on the mountains left standing was astounding. 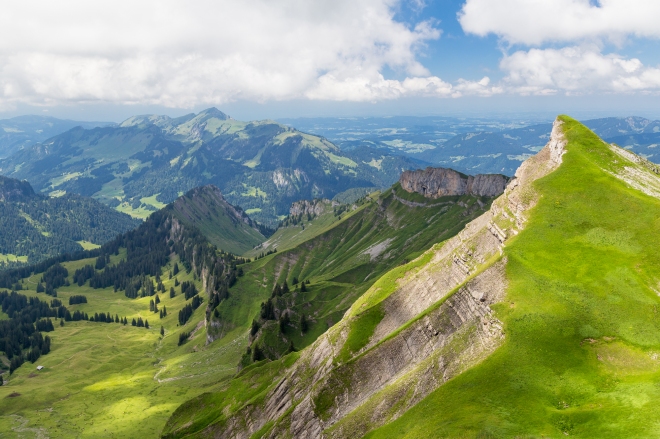 After wandering around the Hahnenköpfle for a little more, I decided to head back down to the car and call it a day. It’s not often that I get to peakbag in the Allgäu, but in each weekend here, I hit at least two summits, was hiking more and more south each time, and gained more elevation each time (1760 m, 1850 m, 2240 m). High five, summer.

Zermatt, being at the end of one valley, is rather straightforward to internalize but is a bit of a drive (six hours). The Allgäu, with multiple valleys and mountains that all seem to be related and therefore look alike, is much harder. While I still think I know this area quite well for a transplant who’s been here a year, the reason I head so often to Zermatt isn’t simply that I find it beautiful: it’s also that characteristically the mountains in the Allgäu are steeper, harder, and require skills and mental stamina I haven’t picked up. But a slow rumbling is starting to awaken the desire to continue exploring here, and given that I’ve been north, south, east, and west of Zermatt now, I foresee more and more time spent in the massive playpen whose doors are within a thirty minute drive of my front door.

* The name “Ifen,” has as far as I know no real meaning but is nevertheless masculine. In German, “the tall Ifen” would be written as “der Hohe Ifen,” with “Hohe” being the adjective form of “hoch,” high. But alone — in the sense of “High Ifen,” with no definite article — the declension of “hoch” turns the name into “Hoher Ifen.” This anomaly is a formula for all nouns and has no exceptions so is easy to learn, but it adds layers of complexity to speaking correctly that neither English nor French (nor Mandarin) have. If looking for information on certain modified nouns, then, note that certain names might look different: indeed, “a photo with the High Ifen” would be “ein Bild mit dem Hohen Ifen“!

What about the south?