2017 has been a varied year for travel. Although I ventured as far away as New Zealand, I didn’t wander far often, and I certainly didn’t feel like I was all that active at home, either. But there is a huge expanse behind where I live, and though I can’t see it from my windows or when the weather turns moodily misty, there is plenty to be photographed in my increasingly-native Allgäu, too.

When I snowshoed the Riedberger Horn in April, I knew I’d be back. Its low prominence, ample parking, and broad slopes make it a short hike for me, and I figured I could pop in after work several times over the summer and grab some sunset shots while sneaking in a quick workout. Or, as sunrise is my preference, that I’d make it up for that, too. Neither materialized. Somehow, I still managed to hike it seven more times this year. Once, in what one might temporally call summer, it was windy, cold, and on the cusp of raining. It had been sunny in Kempten 40 km to the north… the Alps were anything but. We were fortunate and stayed dry for almost the entire hike, learning as we watched the mist around us how the Allgäu stays so green.

About a month later, a colleague I had worked with in Charleston joined the manufacturing team here, and he and a former Charleston intern from the Allgäu and I headed for Rotspitze. It’s a well-known peak just above 2000 m and one I had summited in 2015 with a friend and her family. It was my first big hike of 2017, though, and it was hot. About 400 m below the summit, whether due to the heat or not having my legs back, I lost my energy. I decided not to press on, leaving the summit to my two buddies and enjoying lunch and a nap while half-blocking the path up for others.

Despite not reaching the summit, the views that day were pretty awesome. Time is increasingly a blur so I don’t proclaim to remember everything about what I do on weekends or how the weather was, but that weekend does seem to be one of the few with weather worth wandering into. I headed uphill a little more, taking in the Retterschwanger Tal that I had biked the year prior. It was a little amusing to me that a hike I found not so difficult when I first attempted it — which had then followed another hike of equal altitude gain the day prior — har, har, har, turned into a non-ascent of another R-peak. 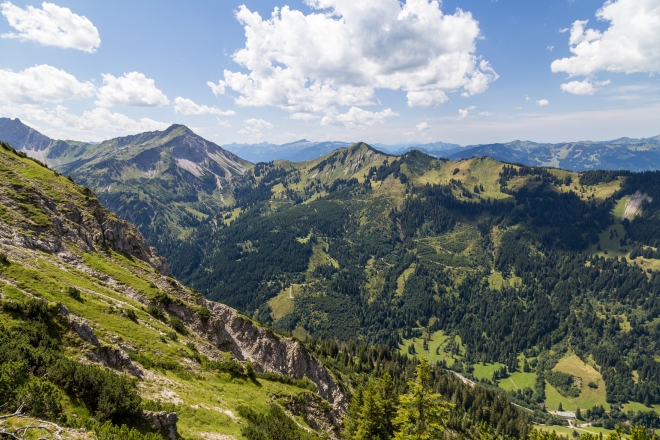 Heading back down the mountain, I could see the flat end to the Allgäu to the north. It’d be here I’d spend most of the rest of the summer, helping prepare an assembly line for running its first parts and then using weekends to unwind from the effort. 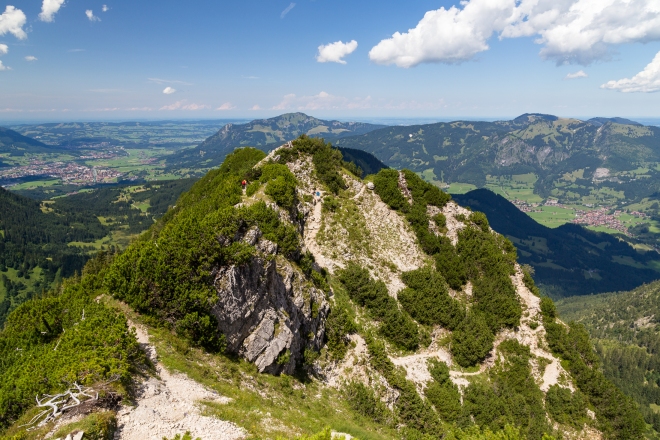 Thankfully, I could always redeem my fear of the letter R with the Riedberger Horn. I ended up taking four or five Charleston colleague groups up the mountain this year, each time in awe at just how expansive the German Alps are, even if they sometimes duck behind cloud.

The last trip up we had a light dusting of snow at the summit, and after this guy realized we weren’t going to feed him and called it quits with the breeze, we built a tiny snowman on the fencepost. Snow in September seemed like a promising omen for a good winter. 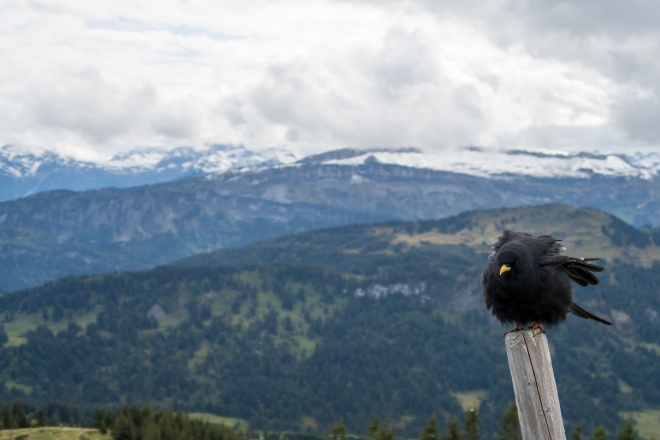 Back in the valley, one of my recurring memories of 2017 was that there were plenty of good sunsets. For most I wasn’t around a camera to be able to photograph, mind you, but there were many colorful, explosive sunsets either way. I don’t have west-facing windows but can still see out to the west, and a few times I stopped cooking to grab some photos as the light turned. Sometimes, I’d see reminders of a time in another world and relapse into wistfulness.

Other times I’d be reminded of the erratic Allgäu weather, storms one minute and cloudless skies the next. In an area as active as the Allgäu is, it’s almost ironic how time can freeze in a given moment, whether at the top of a mountain looking across the landscape or staring out a window and watching clouds boil.

As the end of the year grew near and I had convinced myself there were no more trips to  Zermatt to be had, I was itching for one more trudge up a mountain. The Riedberger Horn was a natural target. Snow, however light on the last hike, had since fallen rather consistently into December, and one Sunday a couple weeks before flying back to the US for the holidays I swung by to see how the sunset would turn out. I had forgotten how to pack for winter hikes, leaving my gaiters in my apartment on my first trip to my car and more or less remembering piecewise that I had forgotten to pack. After an hour to pack warm clothing and the right camera gear, I finally hit the road, strapping on my snowshoes and heading up as most skiers began heading back to town. I could imagine why they came — I was absolutely blown away at how lofty the snow was. This was pow, and the best of it I’d ever seen.

I had also forgotten how much slower snowshoeing can be than walking. I started the trek up with just one hour before sunset to get to the summit, stopping periodically to take in the incredible evening light before eventually realizing that I just didn’t have enough time to make it to the top of the mountain by sundown. In this nature, that suited me perfectly fine. I had the mountain practically to myself; only two groups of ski-tourers swished up around me as I unpacked all that I had been hectically packing earlier. I was warm from the ascent but the weather did its best to cool me down, a strong breeze and temperatures low enough that just three panoramas brought my iPhone from 74% battery to 0%.

The sunset turned out to be a little less colorful than I had hoped, but here, too, I couldn’t be less bothered. Shuddering against the wind and feeling the crunch-slap of my snowshoes against my boots reminded me again how unique each season here can be, with winter perhaps taking the cake of most invigorating. There’s a certain tranquility accompanied by a persisting beauty of mountains cloaked under snow, and even in the face of my admiration for a tiny little island near the Equator this peace isn’t something I’ve found so easily at lower climes.

I was the last person off the mountain that day, arriving at my car after dark and happy for winter tires on the windy, icy drive back down to warmth and food and friends. It occurred to me that although the Riedberger Horn had forever been the “easy mountain,” that day again I hadn’t summited a mountain whose name begins with “R.” This can only mean — what else?! — that I’ll be back again. ;-)