Though lusting over leaving (LOL), I had no idea 2013 would be a travel year for me. Maybe it was because 2012 was so domestic; maybe it’s that I’ve finally realized that I need to go adventure rather than sit idly.

The main purpose of the trip I mentioned previously was business, but to it I coupled some vacation time. Ultimately, the package deal lasted three weeks and found me adjusting to two time zones, visiting three countries, flying with four airlines, and spending five days at an Indian wedding. Congratulations above all to Mark and Sharon and much appreciation for having the honor of being invited to such an awesome wedding!

The organizer in me had a chronology of photos and background text in mind, but somehow I deviated from the plan: I started with the wedding instead of finishing with it. Perhaps it’s because of all the things I saw, experienced, tasted, smelled, or did on this trip, this wedding was the most beautiful. I have never brought a camera to a wedding with the intent of capturing the sentiments there so I can only hope that these four pictures can come close to expressing the tremendous amount of joy and hospitality during those five days in Singapore. 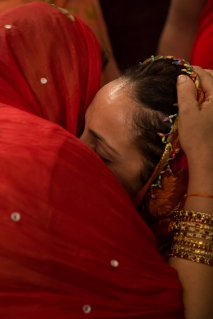