Four weeks out. My impending departure is beginning to weigh on me. It’s been an unreal — incredible — five months, but curiously, the one place I’ve hardly visited is Germany. After several flurries of interest, a trip to Berlin finally materialized over Thanksgiving weekend.

I still don’t know what happened exactly, but three windows on the ICE1090 were damaged en route to Frankfurt. It was not announced if they were damaged by natural causes (tree branches, rocks) or by gunshots, but regardless, we were delayed getting into Berlin’s main station. It’s quite an impressive station: five levels of glittering lights, a huge Christmas tree, and shops selling just about everything. Puts the Paris Est and current Stuttgart stations to shame. 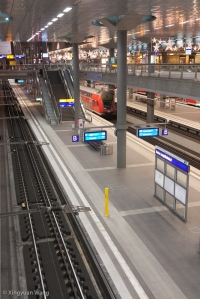 A friend and I thought to make this weekend a bit of a look at history rather than take in the pulse of the city. We started off by doing part of the walking tour that Lonely Planet had suggested; this took us first past the Reichstag and toward the Brandenberg Gate. Just over twenty years ago, it would have been inherently impossible to walk through this gate alive — and now, every one of its five openings permits a free flow of foot traffic. Note to self: change is good. 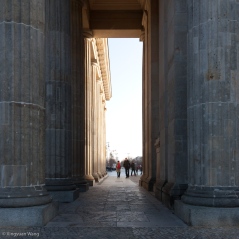 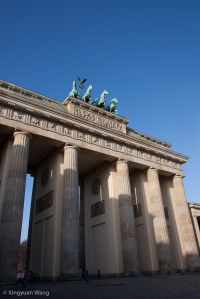 Only a few minutes away from the Gate is the Memorial to the Murdered Jews of Europe. There is no shortage of interpretations of the memorial, even in bright sunlight. Today, it sits among apartments and office buildings.

Not far from here is a section of The Wall. I don’t know (and haven’t had a chance to look up) the significance behind it, but certainly noir the period of its construction and use was. There were only two pre-fab sections of the wall here; the major portion is on the other side of town. 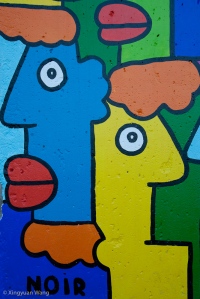 Our walk led us to the Deutsches Historiches Museum, a giant walking, talking, gawking history book about all aspects of Germany’s past. It’s a fascinating place and can easily warrant a full day’s visit for those so inclined. I know hardly anything about lens construction and pioneers of lens design, so I was happy to see a Carl Zeiss microscope on display. ;-)

After a late lunch, we ended up at the Wall, preserved here by the East Side Gallery. It stretches for something over a kilometer and features a pretty wide gamut of emotions and art. (Forgive the white balance on the picture on the right; I didn’t adjust it prior to uploading.)

This part of town is still largely desolate and underdeveloped and feels — to me — a bit lonely, a bit sad. Of the four German cities I’ve been to (Stuttgart / Heidelberg, Munich, Cologne, and Erfurt), Berlin feels the most wracked by its own history. It’s a very curious sensation. One weekend of playing touron in Berlin hardly qualifies me to offer an assessment on everything, but my initial reaction is that deep down the city is still recovering. It’s seen a larger share of history in the past sixty years than some countries see in a century, and some of those wounds won’t and can’t heal immediately. This isn’t to say the city still seems divided (it’s not) or that visitors generally perceive the city to still have physical or emotional barriers all over the place. With only 1.5 km of the former Berlin Wall standing, the idea of that Berlin is a cutoff city far removed from reality could hardly be farther from reality. Instead, I think the figurative walls I’m referring to, coupled with the very tangible museums and memorials scattered around the city, serve as a garrison to protect the idea of Nie Wieder / Plus Jamais / Never Again: it’s easy to overlook at first glance, but this city may have the deepest soul of any I’ve been to yet.