I have less than two weeks left in Europe. It’s a scary thought: most of the money I’d normally put into savings has gone to the tourist revenue of France, Germany, Norway, Austria, the Czech Republic, Italy, and that big financial hole known as Switzerland. I haven’t been to a coast on mainland Europe yet, so refusing to lay low for my last two full weekends and wanting to “make the most” of my German Rail Pass by spending more money on yet another trip rather than suck up the sunk cost of the ticket, with a friend’s recommendation and letting it take the place of southern Italy or France I took a five hour train ride to warm and sunny Hamburg. 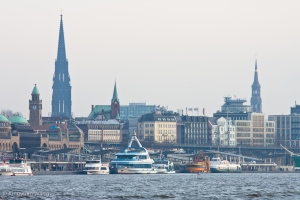 Warm, okay, maybe not, but sunny… the forecast had called for a 20% chance of rain on Saturday and clouds on Sunday. Indeed, 80% of the train ride up to Hamburg was dry (at least extrapolating scientifically from the 20% of the train ride I was awake). It wasn’t until we approached the city limits of Hamburg that rain drops started to streak across the ICE’s windows — rain drops that turned into inch-wide snowflakes in various areas. Frown. I decided to forego the walking I had planned to do in the city and visit various museums instead. I camped out in the train station’s tourist office with a surprising number of fellow tourists given the time of year and tried to plan an itinerary. I wanted to go to the City Hall, the Brahms Museum, the Internationales Maritimes Museum, the Haus der Photographie, the Hamburg Harbor Museum, Beatlemania, and the St. Nikolai Memorial. And maybe the Zollmuseum if I could find it. And hopefully end up at the Museum of Communication. Five hours? Whocaresletsgo.

None of the streets ran north south and I really didn’t want to figure out how to walk from every single U-bahn stop to the destination museum, so I shrugged and wandered outside. I got off to a better start than when I visited Heidelberg and happened by the City Hall (quite impressive, though crowded) within ten minutes and then by the closed St. Nikolai Memorial, but it had started to rain so I kept walking to find shelter. Around this time, my umbrella broke, but convenientely I was in the warehouse district and… what’s that? Ah, look — the German Customs Museum. Not the first on my list, but hey, it’s dry inside. It’s a small, two-story building in a former warehouse with a correspondingly small entrance fee (2 €). They have some interesting stuff, even if most of it is in German. A particularly convincing argument for what to expect from the BRIC nations was a comparison of export revenue of various countries. Anyone care to guess the top three? From an exhibit on the garb of various countries’ customs agents, I was also surprised to learn that Switzerland either doesn’t have customs or doesn’t let its customs agents wear hats. I’m hoping for the former: it means I can perhaps smuggle the Alps out of the country. 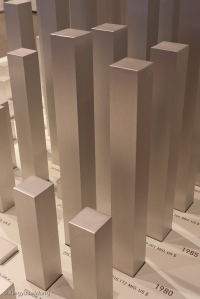 Frightened into obedience, I continued outside, where the sprinklers of the sky were still set to “drizzle.” So far, my trusty mustard-colored (practically unique color in all of Germany) Outdoor Research Igneo was holding up admirably. The International Maritime Museum wasn’t too far away, so I continued there. It’s an awesome place. Nine stories of history, exhibits, scale models (including a 780,000 piece, 870 kilogram Lego ship), and secrets of the seafaring world took me the rest of the afternoon to digest. The scale models intrigued me most. The entire ninth floor was dedicated to small ships, most of which were under a few inches in length. Someone even painstakingly took the time to construct an entire harbor.

The building also happened to be nine stories of museum list evaporating; by this time it was too late to try to visit the other sixteen museums on my list, and I also needed to get back to the train station to retrieve my luggage from a storage locker. I was late by 15 minutes and had to pay 2 € (the first six hours were also 2 €). It took me twenty minutes to find the hotel that was located five minutes from the train station, and while my jacket succeeded in keeping my torso dry, the wind-swept rain had wet most of my jeans. Having a headache and wanting to wake up on time for the 7:30 AM Fischmarkt, I called it an evening and retreated to a warm bed and dry pants.

I woke up at 8:00 AM instead. It was a painful morning, but I finally made it to the Fischmarkt sometime after it was supposed to close. This wasn’t just a “fish” market, however — perhaps an hour ago it would have been be a bustling farmer’s market, random fashion accessories market, and what-Hamburgers-do-on-a-weekend market. 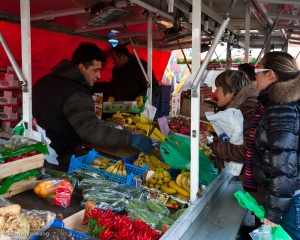 Those random fashion accessories? There were even occasional ones that emulated (unnaturally) the color of the produce.

After the market closed, the pieces of dead fish and discarded produce attracted quite a crowd of squawking seagulls, one of which burped or laughed at or mocked its peers.

The market is down by the harbor area, and naturally there was an industrial skyline demanding to be visited. Unfortunately, all the English-speaking tours reportedly close down during the off-season, and I wasn’t about to put my thirteen-word German vocabulary (three words of which are “I,” “you,” and “you” — ich, du, and Sie) to a technical maritime test. I ventured up and down some piers, visited the at-noon-completely-dead Reeperbahn, and headed back to the train station.

I was initially a bit hesitant about whether Hamburg would be a good city to visit by myself. Being a better hiking planner than tour captain, I thought I’d just be bored with what I saw and overwhelmed with what I missed. Instead, Hamburg proved quite a delight. It’s a pleasantly fun city to walk and one that has a busy vibe, unlike other cities I’ve been to, it feels alive and sprightly. Astoundingly, the harbor area and its Fischmarkt mit Seemöwe also reminded me of a certain US west coast port city, though admittedly without a mountainous backdrop. Maybe this passing resemblance — or maybe for some other reasons yet unanalyzed — I felt that Hamburg would be a second German city I could live in, a city I could be a part of. (I didn’t get to visit the Airbus plant, however, so maybe there’s enough evil there to deter me from becoming a resident of Hamburg.)

Most interesting, however, my weekend in Hamburg helped me realize that the first — perhaps surprising given the little time I’ve spent here — has been Stuttgart all along.

I had a fortnight

2 thoughts on “I had a fortnight”