Some readers might have noticed that there was one color missing from my post on Singaporean colors: blue. Many flowers aren’t blue, and the same holds for most animals, but usually it’s fairly easy to find that color by looking toward the planets. Due to the haze, for the first few days the color proved slightly evasive, but by the end of my time in Singapore it was fairly easy to spot, even through the gargantuan, slatted awning of the Marina Bay Golden Sands Shining Shopping Centre of Extraordinarily Rich People, Tourists, and Gluttony. 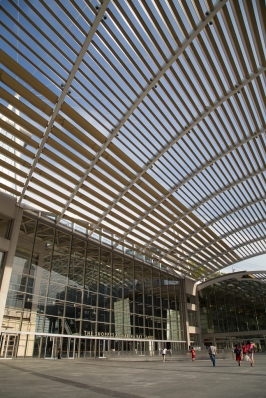 I don’t think I’ve seen a grander shopping center (though, I’m told, Orchard Road has several others that all vie for the title). The thing has a skating rink — directly next to which tired shoppers can sip a coffee and snack on some delicious food before charging back into the stores.

It even lays claim to the world’s lonliest long escalator into a white abyss.

Okay, that one I made up… but the building matches the sophistication and flare of the neighboring Marina Bay Sands hotel. I didn’t pack my tripod for fear of exceeding Singapore Airlines’ rather skimpy 20 kg luggage limit (though they are apparently slightly lenient in cases of overweight bags) so didn’t get the night shots I had in mind, but the Canon 6D fared rather brilliantly even without a tripod.

While on my final day in Singapore I had no planned intentions to visit the ArtScience museum next door to the Marina Bay Sands area (holy cow, a science museum is affiliated with that big-ass hotel!), the “Essential Eames” exhibit drew my attention. I’m far from a simplistic engineer and tend to imagine complicated, rather than elegant, designs, so the focus on functional practicality was eye-opening. It was also neat to see various Herman Miller chairs — the chairs in my office now are simply laughable. The white balance is intentionally off in these photos. 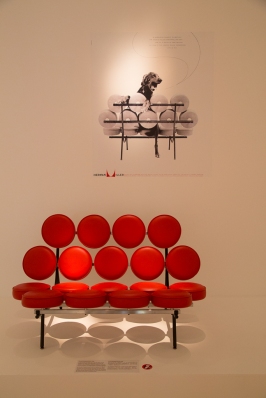 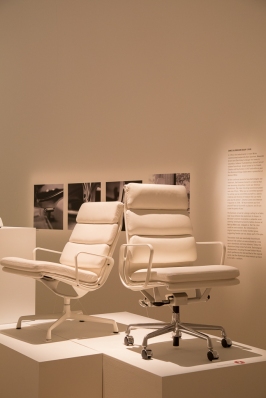 As I walked back to my own hotel, contemplating at which restaurant to take my final meal, I was reminded that in less than fifteen hours I would back in Germany, working with a global company whose reach had penetrated even this remote island.

And no wonder. The title of this post refers to, of course, the Malay Singapura, “The Lion City,” among the four Asian Tiger economies. But the country is so much deeper, more cultural, than just its favorable business climate. Don’t get me wrong: for such a small area, its influence on the global financial market and shipping trade is incredible, and that it has developed such a refined airport and impeccable airline as an island is flabbergasting. But it’s not often that a vacation makes me contemplate the morality of prosperity: I initially felt that the country had its own, unique identity while successfully sustaining multiple cultures and viewpoints, but later, a discussion with a native had me considering how planned some of the growth and diversity were. Compare this level of deliberation to most of my blog posts, which are normally about rocks. Or a single rock, even.

This place is, in a word, intriguing, and to the fullest extent. It certainly isn’t perfect, but after being here outside of Formula 1 week, I left hardly surprised Singapore is a candidate for being the best city in the world. 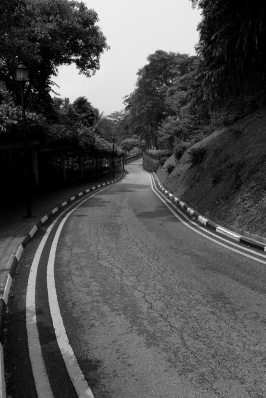 A Lion among Tigers