In the face of an ever- and quickly-changing business climate, it’s easy to forget just how old China is as a civilization. Even though on its surface China appears fresh and adaptive, beneath the facade is a culture that has weathered storms. Indeed, the contrast of ages doesn’t take long to show itself in China: I stood watching the only unobstructed sunset I saw on my trip from a new building, looking out over a slowly darkening sky and old apartments below. 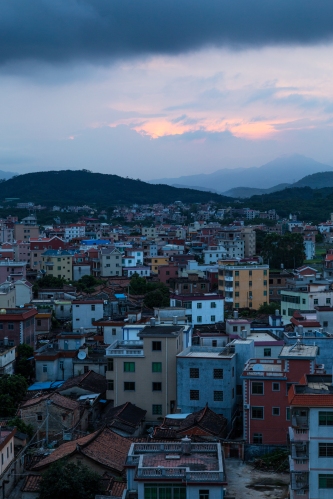 The Fujian Tulou is a UNESCO World Heritage site, and through regional tourism the area has become somewhat commercialized. What caught me off guard wasn’t the locals still showing off their customs but rather that inhabitants of the earthen buildings still carried on in the face of tourism much as they likely did decades ago. That perseverance is unexpected in the commonly misperceived and sensationalized context of Chinese upward mobility.

Hundreds of miles to the north, legends and poems still surround the Hangzhou Xi Hu. In the middle of the lake is the “Three Pools Mirroring the Moon” (三潭印月), one of the ten scenes of West Lake. Viewed during daylight from afar, there’s little engaging about some stone mock-pagodas poking above the water, but people still flock to the lake at night to light the insides of the pagodas and watch their reflections dancing on the water. The flames dance through the openings in the pagodas and create little “moons” on the water. Incidentally, the night that this is most popular — the night of the Mid-Autumn Festival — was just a few days ago, and all that is left with me of this tradition, thousands of miles away and dissociated by years in the US, is a daytime snapshot. 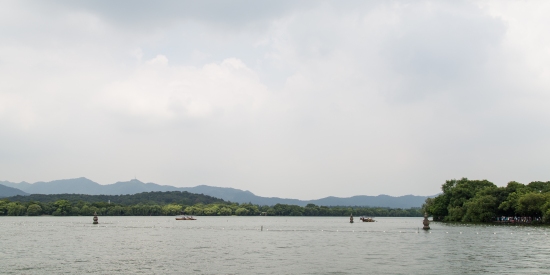 At the Song Cheng performance, no expense was spared to showcase the majesty of the Song dynasty and the history of the Hangzhou area. I can’t say I fully understood everything going on (some of it was Chinese opera, most of it was too far away, and all of it was in Mandarin I didn’t entirely grasp), but it was nevertheless humbling to see thousands of years of history retold in ninety minutes. 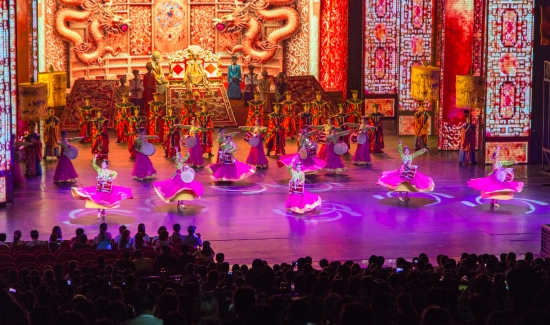 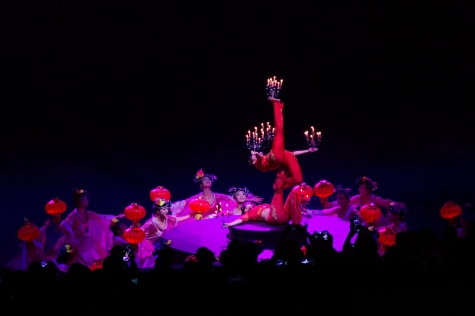 The great changes experienced was not lost on sculptors, either, apparently. At the Qian Dao Hu, there were three interesting characters placed just off the boat landing. The faces of the woman and child — the woman with a determined face but with her back hunched, almost as if in pain — told a story I’m fortunate not to have had to live.

A day prior, I stood watching a vase in a distant room of the Ge Yuan as our tour guide explained the main chamber a few feet away. Maybe this vase was not the original art, and even if it was, maybe it, too, stood quietly in its time. I wonder what other stories were told in this room, this house so many years ago.

I continue to avoid outright portrait photography, but even lacking photos of the life of Chinese people I’ve been left pondering the legacies passed on through China’s rich history. Visiting Singapore brings about the question of relatively modern decisions and choices; visiting China — or even just Shanghai — reveals the rifts between thousand year-old institutes and what is quickly becoming. Its commercial skyline is still growing, and as it does it looms over the Bund, which was in its day a snapshot of much of Shanghai’s influence.

Two days later, I replenished my love for layovers by spending an entire day in the Pudong Airport. Here, in the face of arguably the most modern form of transport, it struck me just how much had changed. The airport opened in 1999, when the primary large jets visiting would have been a 747. Sadly, no longer are the four engines of the Queen of the Skies still needed for Earth-spanning range; just two engines on modern widebodies will do the work of an aging 747-400 at less cost, less noise, and more comfort. A 50% reduction in engine count in less than 15 years. How much change has China seen in 5000?

As I watched a United 747 push back from her gate, I thought back on the past two weeks: it was hardly a relaxing time. Almost  paradoxically, it ended up as a trip to get some rest while touching base with what makes me tick. I don’t understand the nuances of the culture and perhaps never will; like the unmistakeable majesty of the 747-400, they’re simply what makes China special.