While I haven’t seen all of Charleston, most of my photos of the area have been of the bridge. Without natural elevation to influence the vantage point, I’ve also struck out on shooting an overview of the Lowcountry. That changed when a coupon for Holy City Helicopters appeared in my inbox.

The company is professional. They have two helicopters, one of which is air-conditioned, both of which have full doors and are comfortable. They offer a thirty-minute tour that is just barely enough to squeeze in sights of most of the peninsulas; longer excursions (over Awendaw or Folly Beach or Edisto) would bump into the one hour category. I was excited enough to miss a good deal of shots, but it was still pretty cool seeing the city from the air. It’s impressive that there is still a significant amount of greenery around; most urban areas in the US are recreated with concrete as the canvas.

The Morris Island lighthouse stood out — other than a sand spit, there is nothing around it but water. I’m not sure if that changes with the tides, but it gives a new perspective to the mornings I spent shooting it from Folly.

Leaving the airport, we flew south over downtown and looked east across the bridge; I got the shot looking along the bridge but I decided to avoid posting that picture due to the glare off the road signs. Heading west, I missed the along-the-bridge view of the Double Diamonds. Instead, what we found was the Bridge to Sunsets. This one was a bit iffy, but the view is still completely different from what I am used to.

Some weeks later, a friend visited and we headed out to Fort Sumter. I find the Civil War fascinating and so the visit was both educational and a chance for me to play tourist; in the 2.5 years I’ve lived here, I hadn’t made it to Fort Sumter until that weekend.

I’ve seen downtown from the water, but the ferry ride out to the Fort offered a nice view of Waterfront Park.

Heading to the bow of the boat, we began to see the small bar built up to provide protection to the Charleston harbor. My luck with weather (in the mountains, Germany, China, and Singapore) thankfully continued to hold, as the clouds, though menacing, only dropped a quick shower before staying dry the rest of the day.

150 years ago, the cannon must have faced every which way. Imposing as they once were, now they are painted but otherwise rusted shells that serve only as reminders and symbols to a maritime port city. 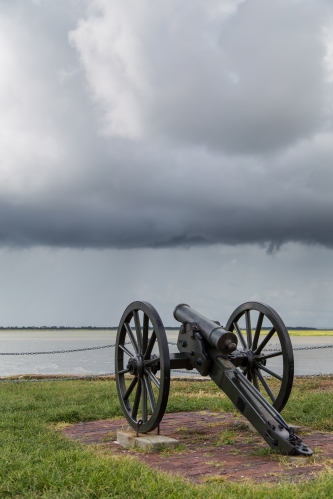 For lunch, we ate at Butcher & Bee and happened to stumble next door to its sister market, The Daily. Intended to be an in-and-out stop for artisan sandwiches, fresh coffee, and other quality snacks, we lucked out and picked the day of its opening to check it out. The cappuccino was awesome and the setting pretty neat. First the serendipidous weather, and then coming across a new café! What else could we ask for?

As we walked around downtown, we found our answer — the City Gallery of Charleston was having an exhibition called “African Diaspora: Convergence and Reclamation.” We were actually on our way to James Island when we came across a parade headed toward the City Gallery, so we followed them inside and enjoyed the local art and company of the artists. For a city this size, there is a remarkable number of activities going on. The challenge, for me anyhow, is to find them. Happenstance isn’t a bad way to do so!

My passion for sunrises (and less enthusiastically, sunsets) typically still trumps other forms of photography, so I got excited when while driving back from West Ashley I saw the lights of the Ravenel Bridge lighting up low (really low) clouds. This is one of the scenes I’d really like to capture, so I decided I’d see if the clouds would be similar the next night and check it out. One day later, the clouds were significantly less photogenic, leaving me to shoot the other direction. From Remley’s Point, the breakwater posts were an interesting lead-in to the city lights to the west.

The takeaway from this is that Charleston, rather devoid of weekend access to Mt. Rainier or the Switzerland Alps, still has its fair share of things to do and places to check out. While a small city, there is also a fair number of international expats here — giving the area a touch of the diversity I miss from Chicago, Seattle, or Stuttgart. Photograpically, this means that I’ll keep trying for the shots I can see in my mind but haven’t yet taken while still enjoying every outing I have the opportunity to go on. Not every area affords that creativity; in hindsight, southeastern Michigan was more difficult in this endeavor, for instance.

Just yesterday, as I was driving home from work and watching a glowing sunset in my rearview mirror, I saw a Holy City helicopter heading west as it finished its 30 minute sunset tour. D’oh; those passengers got to see the sunset I wished I had seen on my flight — but that’s okay. With these views and the refreshing perspective that altitude offers, I get the impression that I’ll be back for another whirl! 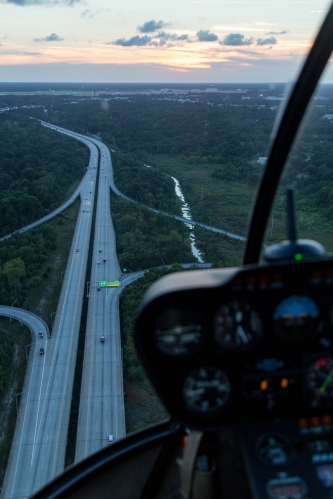 One thought on “New perspectives”