Partly due to missing last Saturday’s sunrise, partly due to not seeing much fall color, and mostly due to a completely-clear weather forecast, I decided to try my hand at backcountry camping one week after living the easy life in a Hendersonville cabin. This time, I’d be right next to my sunrise spot; take in the crisp, 6000 foot altitude air; and eat my heart out at the expansive views. They say that just a few days of backcountry camping can free the soul. Two days in the Pisgah wilderness and I’m in full agreement. 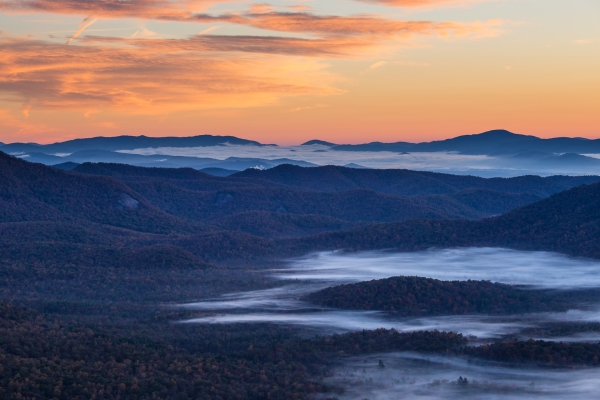 The first night, I decided to sleep in my car. A weak way out, sure, but a convenient one as I arrived at the Pounding Mills Overlook (Blue Ridge Parkway: milepost 413) several hours after sunset. With no hiking or setting up a tent, this also gave me extra time to catch up on sleep, my favorite of weekend pastimes. The sunrise itself wasn’t spectacular, but what makes one unique — a sense of tranquility and solitude — was interrupted by the periodic rumbling of other cars bringing other photographers to witness the scene. Turning my attention away from the sky, I found the scene in the valley floor interesting: blown by a light but steady wind, the fog draped across the lowlands like a receding river through deadwood. Amid the din, watching this unfold was calming. 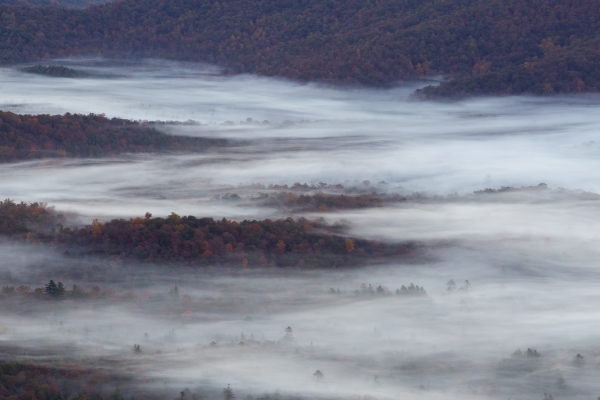 As the sun turned on full, the golden hour revealed a fairly impressive foliage scene, something I had missed last year due to arriving in the mountains too early. Provided the weather stays dry, even more color change is likely to arrive in the next 10-15 days, particularly at lower altitudes. 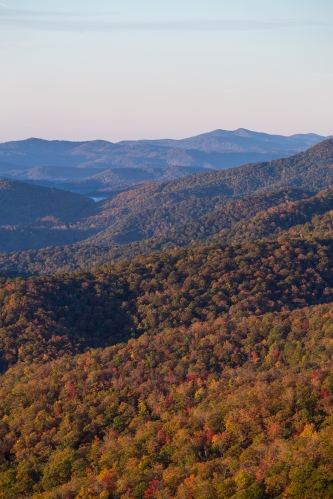 A few miles up the road is Graveyard Fields, elevation roughly 5000 ft. None of the hike felt at altitude, but the colors and the views alike are reasons that this area is one of the Parkway’s most popular. Heavy rains earlier in the week dropped many of the leaves that had already changed color, but I’m not sure you can get any more “autumn” than this! 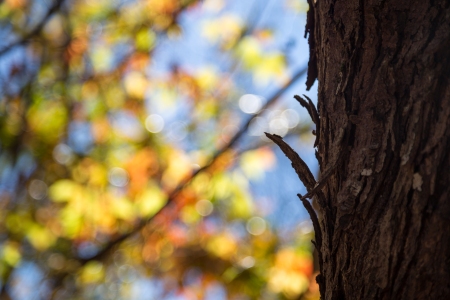 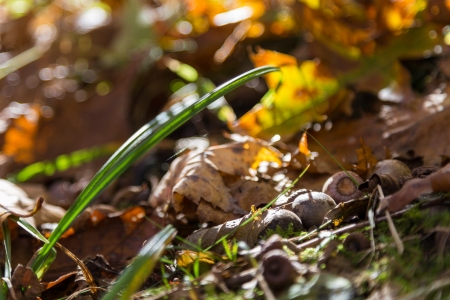 My biggest win was starting my hike early. Although the Graveyard Fields Overlook was renovated this year with additional parking spaces and nicer bathrooms, by noon drivers were vulturing spots in much the same way they do on Black Friday. I was fortunate to grab a shot of Lower Falls without people in it. Triple Falls the week before was more majestic, although it is difficult to beat the 0.6 mile stroll from the parking area to these waterfalls! 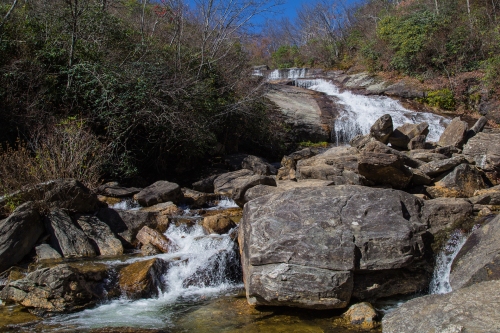 Leaving Graveyard Fields, I drove just over a mile further south on the Parkway to arrive at Forest Service Road 816, the winding path that is an artery of several trails in the Black Balsam and Shining Rock wilderness. Like Graveyard Fields, this road was also resurfaced this year and is now completely asphalt from the Parkway to the trailhead parking lot. Also like Graveyard Fields, the parking areas were positively overflowing, and I ended up parking off the side of the road not too far from the trailhead of the Art Loeb trail where it makes its way up toward Black Balsam Knob. Not knowing this secondary path, I ascended the mountain along the Art Loeb Spur from the primary parking lot, and a short climb later stood atop Black Balsam Knob and contemplated my camping and sunrise options. I decided on a spot below the summit of Tennent Mountain, introduced to me about two months ago and calling my name ever since.

The sunset was fairly benign, except for howling wind that actually pushed me backwards a few times as I took pictures. The double hump of Sam Knob, itself a 6000+ foot peak, rises in the foreground as the Smoky Mountains loom along the bluish infinity. 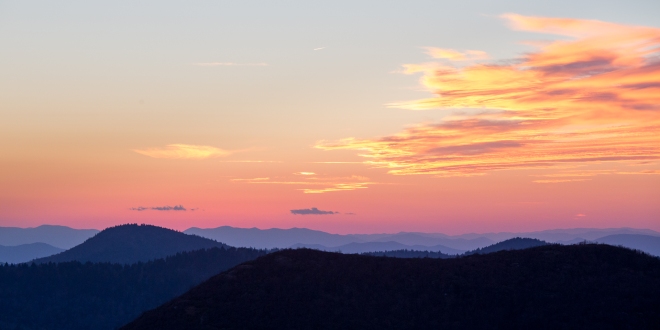 The temperature dropped with the sun, so I bundled up for an early night and fell asleep to the sound of my rainfly flapping hard in the wind. The wind picked up overnight but died down in the morning, and I awoke to clear skies with some streaks of clouds. Aided by moonlight, I quickly hiked over to Black Balsam Knob. The summit of Tennent is filled with low brush, making uncluttered wide shots a bit difficult. On the other hand, Black Balsam (whose summit is clear) is blocked somewhat to the north by Tennent, so while the views aren’t as expansive peripherally, the lower areas are fully revealed from here. 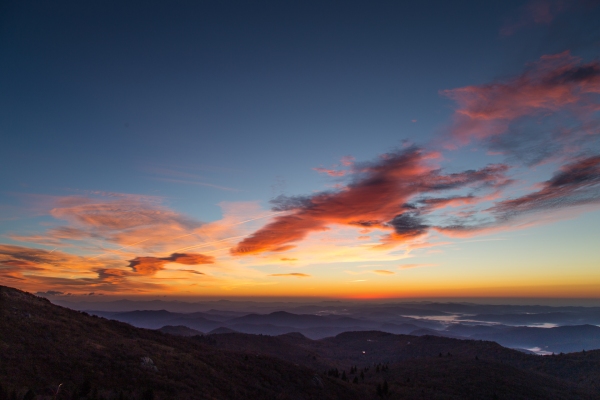 The previous morning had grimly reminded me that I still hadn’t purchased a graduated neutral density filter, so I again exposed for the sky and pushed the foreground slightly in post to render the scene more similarly to what I actually saw. The human eye is a wonderful gift; if anything, photography makes me appreciate vision — and ironically, the absence of photography and taking in the scene directly — even more. Even so, I couldn’t help clicking the shutter several more times. With the flat summit of Black Balsam Knob to myself, I watched the sun poke its way into my day. I don’t know if I’ll forget this moment: so peaceful, so humbling. 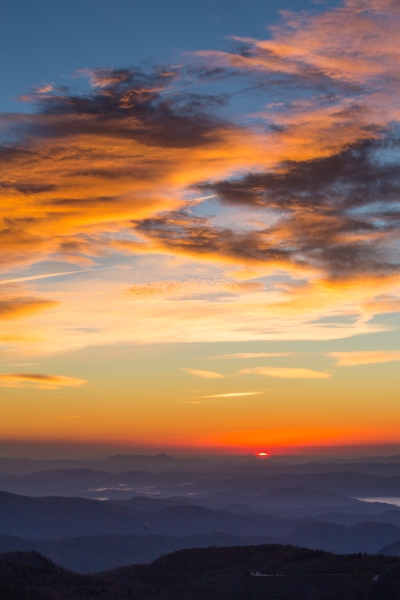 Minutes later our favorite star was above the horizon, revealing the depth and namesake of the Blue Ridge Mountains. From Black Balsam, Graveyard Fields is also visible; the two are connected via the Mountains to Sea trail and Graveyard Ridge trail. 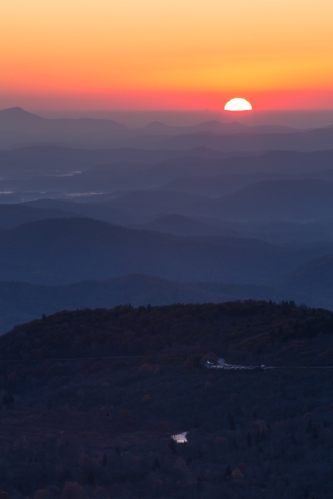 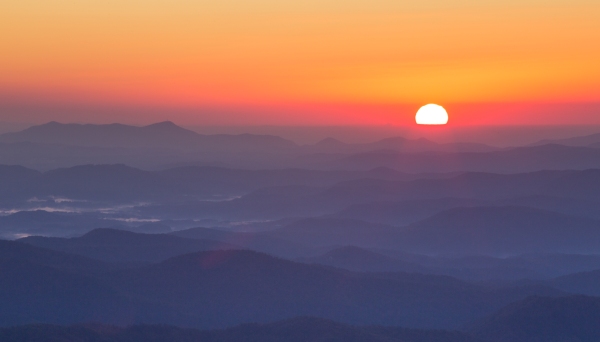 Fully risen, it basked the surrounding areas in a warm, orange-gold glow. The Blue Ridge Parkway, perhaps a mile away, winds its way around the hills. 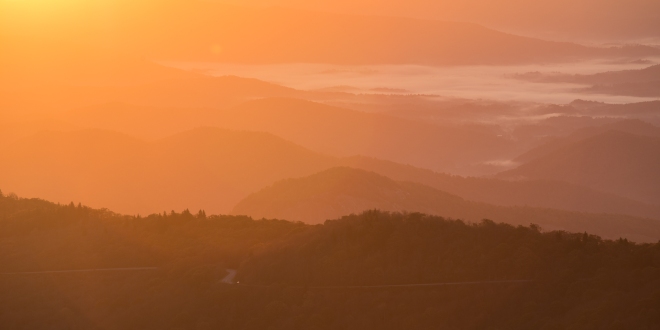 The sunrise was enriching. It embodied everything that feels so right about being up early in the morning and showcases the awe of nature. Nevertheless, with clouds on the western skies, I decided against staying an extra day and packed my tent to sadly start my way back toward civilization. I was about three miles up the road from US-276 when I realized I could still make it to Max Patch Mountain as I had originally intended, so turned around at the Mt. Pisgah picnic area and headed instead for the Harmon Den area of Pisgah National Forest.

What greeted me there I wasn’t expecting. Row after row of mountains, with crepuscular rays streaming down to illuminate the colors below. I could have stayed here for hours to watch the light dance; it was mesmerizing. 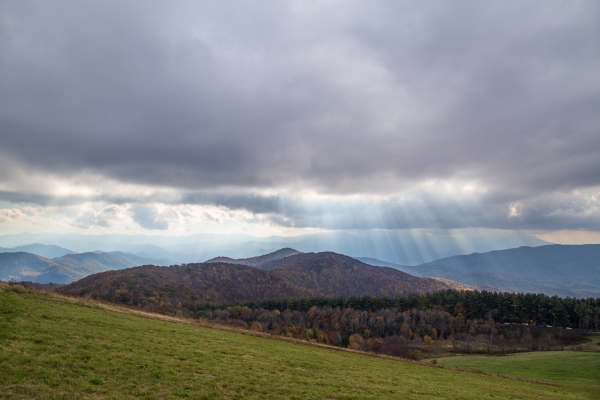 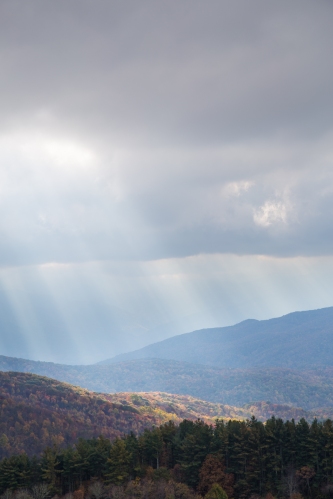 Max Patch, like Sam Knob, Black Balsam, and Tennent Mountain, is a bald; its top is grassy and without trees. Its views are, in a word, breathtaking even though it is surrounded by taller mountains. The sun even opened up for a little bit before diving back behind the clouds. 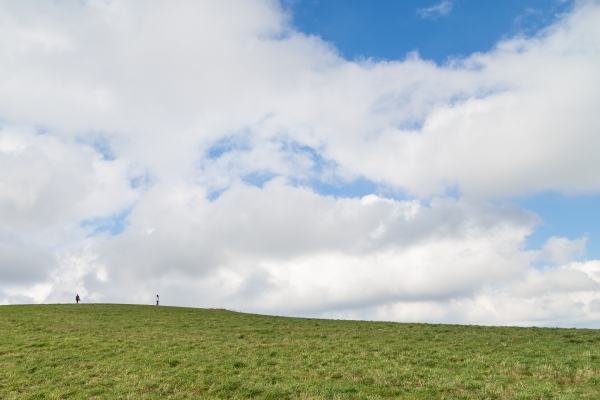 The Appalachian Trail also runs across the summit of the mountain, though I’m not sure I could finish the trail after crossing this mild hump; the views are that incredible. 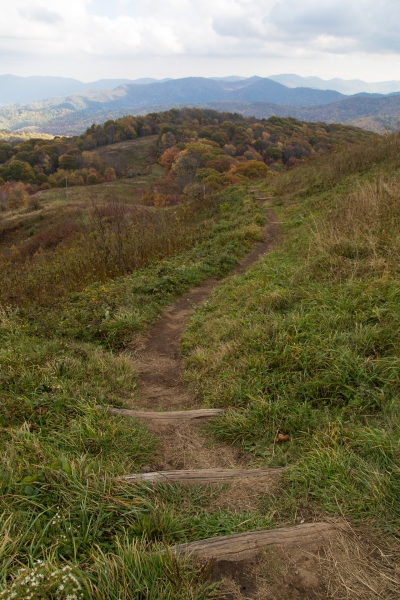 After walking around the bald for an hour, I finally pried my eyes away and started downhill — but not before one last shot of the light that had made my afternoon. 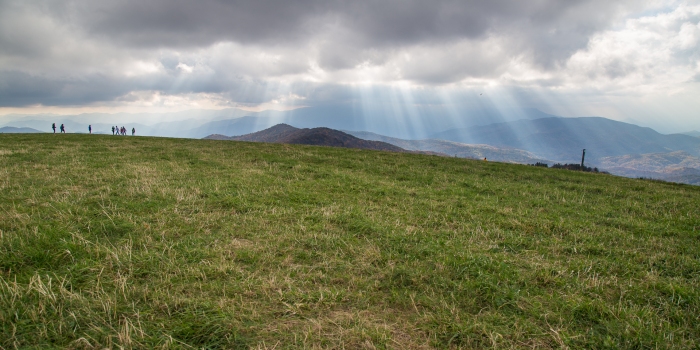 I hadn’t stopped for pictures on the way up to Max Patch, but there was fall color along the whole route (and in particular, along US-276 between the Parkway and Waynesville). A bend in the road to Max Patch provided a convenient alternative shot on the return trip. 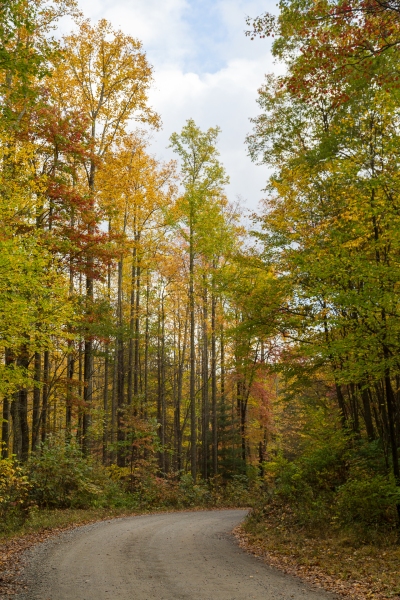 As I neared US-209, coming around a corner on Max Patch Road, I saw perhaps the best sunrays of the afternoon. High on a hilltop there were several trees with crepuscular rays behind them, streaming down from the heavens. If the sunrise and wonder of Max Patch that afternoon weren’t enough, this was riveting. Sometimes, photography is about practicing the “art” of being in the right place at the right time. When I come around a corner and find this, the art of photography tends simply to “luck.” 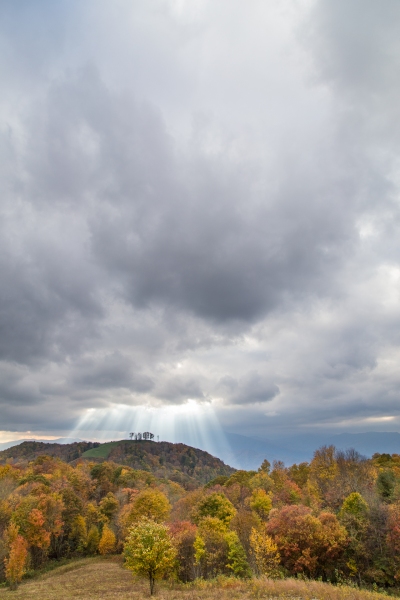 Given the surreal timing and lighting, I decided to take some liberties with the scene. I used this effect last year to emphasize the amount of color in the leaves, but this time I decided to give motion to the deafening silence. 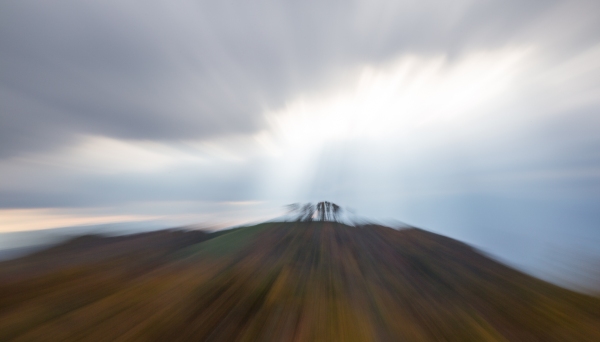 No matter what the reason for my inexplicable desire to go to the mountains, no amount of preparation to be among the clouds could have rivaled the fortuity of this weekend. The beauty of the wilderness I so love is owed in many regards to the Wilderness Act, which this year celebrates its 50th anniversary. The Act offers a succinct definition: “Wilderness…. Where man himself is a visitor who does not remain.” In the same breath, however, I can’t help but think of John Muir’s famous quote: “Going to the mountains is going home.” For me, so it is. Whether it’s Rainier, the Swiss or Lyngen Alps, the Allgäu, or, now, the Blue Ridge Mountains, there’s a sense of belonging and a twang of desire that will keep enticing me back to this nature, time and time again, for photos or without: “The mountains are calling, and I must go.”

2 thoughts on “When it Begins to Feel like Home”