Winter was rather cold in Charleston this year, though sometimes swings in weather bode well for colorful skies at dawn and dusk. I missed a good sunset two weeks ago so headed to Pitt St later that week to make up for it. Clouds extinguished the setting sun quickly, but the trees had started to bud: summer is coming! 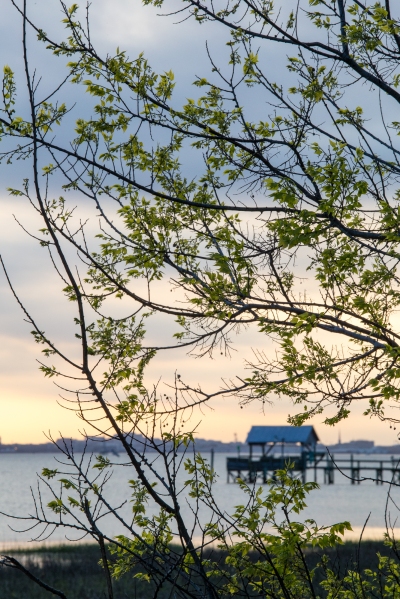 Along with the arrival of summer, I’m also waiting on a set of ND filters to arrive. I grew restless after seeing a recent forecast, so drove out to Botany Bay for low-tide sunrise. The last time I was out there, I misread the tide tables and ended up with my bike in the ocean; this time, I made sure the beach was growing as I took pictures. The planning worked, though perhaps too well: my solitude was interrupted by over a dozen other photographers also capitalizing on the low tide and promising weather… looks like this spot is no longer a secret. 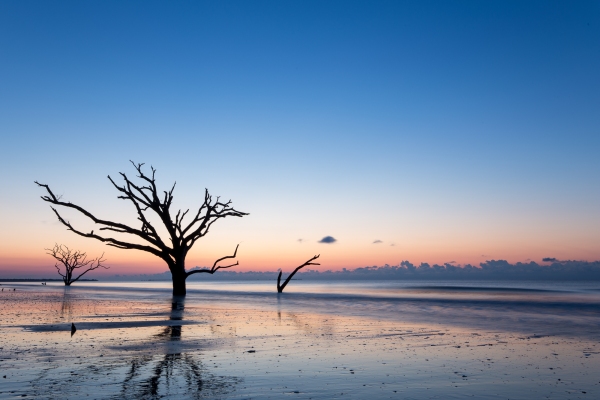 Unfortunately, the clouds were far offshore and didn’t make for quite the foreground I had anticipated, but there’s hardly a more tranquil way to spend a morning — incessant shutter clicks or not. Furthermore, with receding waves it was neat to be able to see different parts of the beach; what had been submerged in previous trips was finally exposed and approachable.

While the color returning to trees and presence of sunrise photographers points to the beginning of spring, the photos here don’t show the missing piece of the spring puzzle: mild temperatures had not yet arrived for good. The evening of the sunset was around 50 °F, and the morning of the sunrise around 35 °F (n.b.: for Charleston, this is still winter weather). I would be traveling to Washington, D.C. in one week for vacation: had spring arrived on the entire East coast, or was Charleston simply basking in a smug warmth while the rest was still being plundered by snow and ice?