The Second World War ended nearly 27 years after the Great War, but it was almost six decades before a memorial would open to honor those who served the country during World War II. A water feature encircled by fifty-six columns representing the wartime bond between the states, territories, and Washington DC, gives the memorial an appropriately somber mood late at night. Though criticized during its conception for breaking up the National Mall’s open spaces, its position establishes its tribute to other challenges that the US faced and overcame: it looks to the west to President Lincoln and his leadership during the US’ greatest moment of dissolution, and toward the east to the monument honoring our nation’s first president.

What fascinates me most about the collection of monuments within the two mile radius of the Washington Monument is how well thought out the arrangement and details are. It would be fairly easy to build two monuments with a large section of grass between them, but to add a new memorial while preserving the significance of the others is an understated but thought-provoking accomplishment. In 1982, the Vietnam Veterans Memorial was dedicated amid controversy but with distinct nods toward both the Lincoln Memorial (toward which the western wall points) and the Washington Monument (toward which the eastern wall points). The names of the servicemen and servicewomen are listed chronologically, beginning at the center of the east wall and then wrapping around to the west wall — providing a sort of temporal closure to the soldiers who lost their lives. In addition, the wall’s panels reflect the observer, bringing together past and present. At the correct angle, they also reflect the Washington Monument. When I took the picture early in the morning in a light drizzle, I didn’t notice the second reflection, but seeing the memorial at my own pace pre-dawn and pre-crowds was a touching experience.

Where the World War II and Vietnam Veterans memorials are symbolic, the Lincoln Memorial is dedicated to the man who oversaw the split of, fight between, and start of reunionization of the states. Either due to location, architecture, or historical significance, the memorial seems to attract visitors around the clock. My first visit here this trip was the afternoon of a warm day, and it was nearly impossible to get a unobstructed shot of the building or of Lincoln’s statue. Even at 10:30 PM, there were still people on the steps. It rained all of Friday, but Saturday was due to be clearing so I awoke early to try to get a people-less shot of the memorial and of the sunrise. The rain left the ground as a wind-blown mirror and the early hour kept people away, though astonishingly in the three hours before sunrise there were still a dozen or so visitors — of whom perhaps two were photographers with similar intents to mine.

Though it can seem it, not all memorials or graves in the DC area pay tribute to brave soldiers or past presidents. Tucked behind the Memorial Amphitheater at Arlington are headstones recognizing contributions made by a different group of pioneers: astronauts who lost their lives on the Space Shuttle Challenger and Columbia missions. It is perhaps unusual for scientists and researchers to give their lives while exploring their fields and is a tragedy when a means to further the boundaries of scientific understanding go awry. It is fitting and proper (!) that a memorial for the astronauts who lost their lives be placed among so many courageous men and women who died advancing other frontiers of this country. 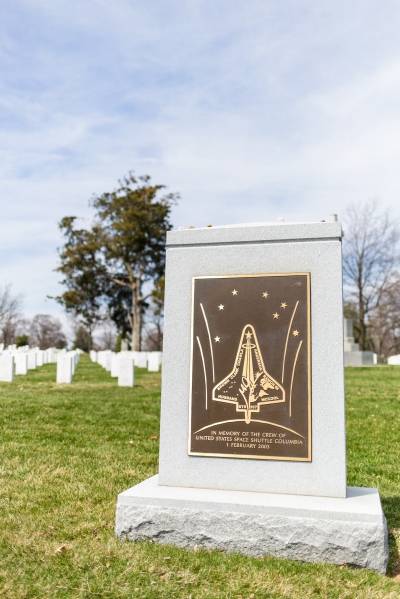 It is incredible for one small city to house so much historical significance. On my previous visits to DC, I had not considered the implication of that recognition. This time, the important takeaways for me were the rather insignificance of my challenges when compared to the ordeals faced by so many before me and, on a societal scale, a newfound appreciation for the many salutes to fallen comrades and leaders — with whose precedents we just may be able to move ourselves and our country forward honorably, responsibly, and graciously.