Between my seven visits to Zermatt, I’d say that I’ve learned this corner of the valley pretty well for a visitor. But ask about the valleys that surround Zermatt, or the mountains that ring Zermatt, and I can only identify the immediately recognizable. (Indeed, from my photos one would think I could only pick out the Matterhorn!) Beyond that valley, my knowledge is even rustier. The figurative breathlessness of the Alps is not limited to Switzerland; the breadth of these is imaginable but is practically unrealizable for those removed from alpine business, so it is with great happiness that I live so close now to the unimaginable vastness. While most of my hikes have been solitary, somehow the magic of the mountains burns stronger when a friend comes to visit. 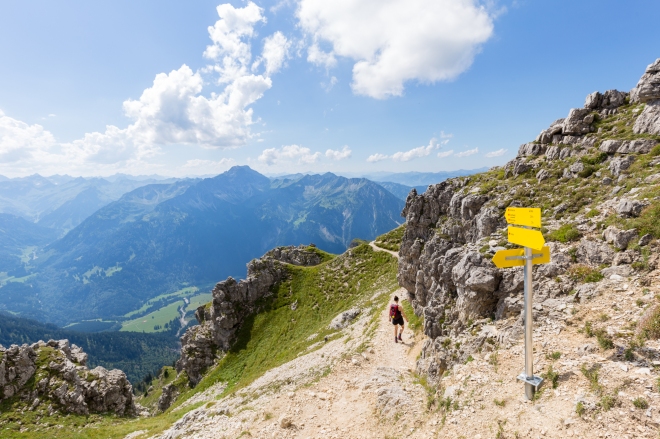 On Saturday, we decided on a hike in the middle of the Hinterstein area. The Ponten and B’Schießer are two mountains near each other that require little mastery of fear of heights and no climbing, so the hiking was straightforward. The Hinterstein valley is separated from its neighbor, the Tannheim valley, by several mountains, one of which is the Ponten.

The duo can be hiked in a day, so after summiting the Ponten we headed down along the ridge and continued on the saddle toward the B’Schießer. From there, the expanse of the Alps is fairly obvious. Three peaks stand point: the Ponten (left), from where we had just descended; the Geishorn (middle), which is a popular tour both from Hinterstein and from the Tannheimertal; and the Rauhhorn, which to this day I have still not summited.

The temperature was a bit warm for “perfect hiking weather,” but the skies were wonderfully clear for the rest of the weekend. On Sunday, I needed to drive to Stuttgart in the afternoon so we made a quick hike up the Rubihorn in the morning, starting the hike in cool temperatures and a pleasant breeze. My first trip to the Rubihorn was an unsuccessful sunrise attempt. On my second go I made the summit, but ran out of food on the way up and had to eat the core of an apple to give me enough strength to make the trip back down. (That experience, which came at the end of a sunrise hike up the Grünten, was not fun and earns a strong “do not recommend.”) A third time is apparently indeed the charm, and as we approached the summit the breeze was just starting to turn from cool to warm. 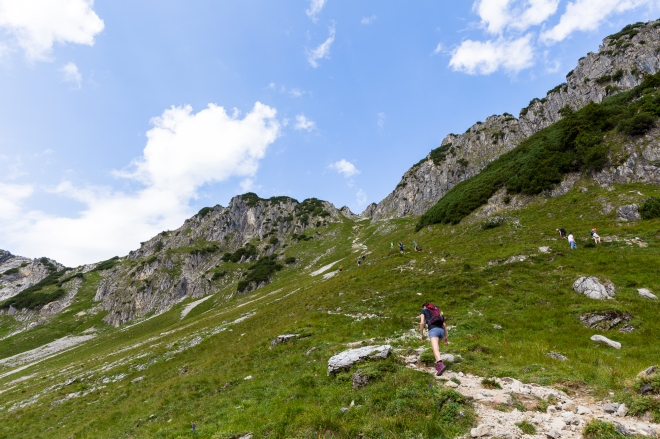 The Rubihorn is considered a rather straightfoward hike in the Allgäu, both in that it offers terrific views and that it requires no climbing. I was therefore surprised last year to find cables and exposure on such an “easy” hike, but in hiking more around here I suppose I have gotten more accustomed to it. This time, the experience wasn’t so harrowing. It will be some time, yet, however, before I can scamper up and down these slopes as nonchalantly as the locals do. 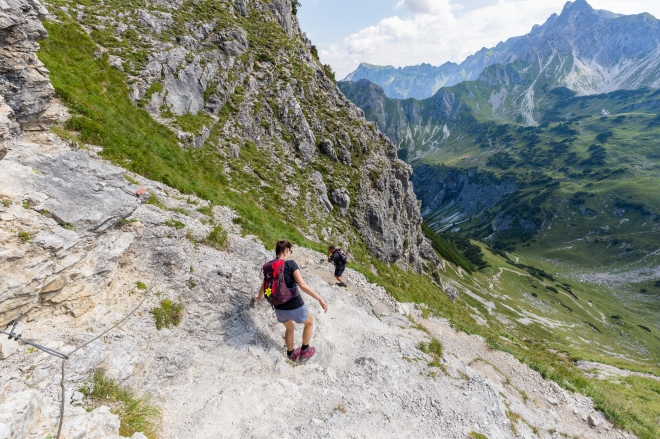 The summit views were better than I remembered them from the second trip, though the lack of rain for the past week had begun to drape a light layer of haze over the area. The Iller valley seems to end here, and the Kleinwalser valley picks up the colors and plunges toward the Hoher Ifen and into Austria.

The true summit of the Rubihorn is a couple dozen meters south of the cross and offers more views of the Allgäu. Running north away from the summit is the Illertal, with the cities of Sonthofen and Immenstadt seemingly not too distant. 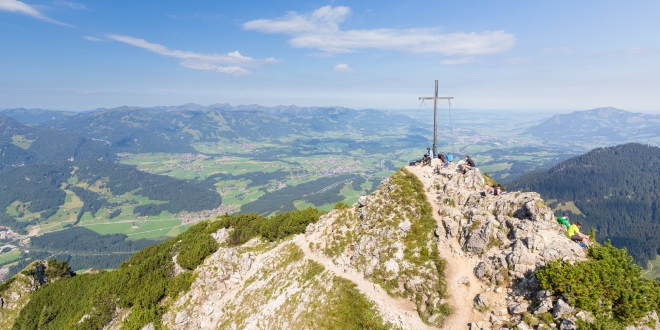 At the summit we could hear an unexpected surprise — an alphorn concert from the neighboring Gaisalphorn. A wind instrument that when when played well has a timbre similar to that of a French horn, hearing its light notes was a bit of nostalgia back to my days as a musician and a close-knit group of bandos.

I was thrilled to have a friend come and explore this highwalker’s paradise with me. Switzerland was always fun with friends, but exploring the Allgäu is a little different. This corner of Germany doesn’t receive all that many international visitors, and even as one living here I haven’t explored its richness (mountainous or culturally) nearly as often as I should. A destination hike with pals is a bit of a one-off experience, but being able to showcase the high country I live in is a delightful reward on top of the joys of camaraderie!