Most of my life has been spent outside of China, which makes explaining where I’m from a bit of a tricky question. Sometimes I explain that I’m from Chicago, which surprises colleagues because the division I’m working for now doesn’t have an Illinoisan presence; other times I say from Charleston, which doesn’t appease because “b-but you don’t look like a Charlestonian,” and other times I say from China, which is typically met with bewilderment because my English is unaccented. But of all the places I’ve lived for any longer time (i.e. excluding Seattle), it’s Chicago that still feels most comforting when I return. I was there for a high school reunion about two years ago, but a few weeks ago, in visiting a friend for a wedding in Wisconsin, I got to take a look around my old stomping grounds one more time. But first, the wedding, which took place in a quiet town about a half hour west of Milwaukee.

From manufacturing pressures in Charleston, I began to learn (or adapt to, anyhow) the joys of cramming an international trip in the span of a long weekend. I had an trip with the same intention earlier this year, but this time I brought work with me. The venue of this ceremony was also outdoors, but rather than at a resort it was on a farm. The preparation blew me away. Every detail appeared to have been meticulously planned, the barn was spotless, and even the pets (two cows (!), a horse, some chickens, and goats) were on good behavior. 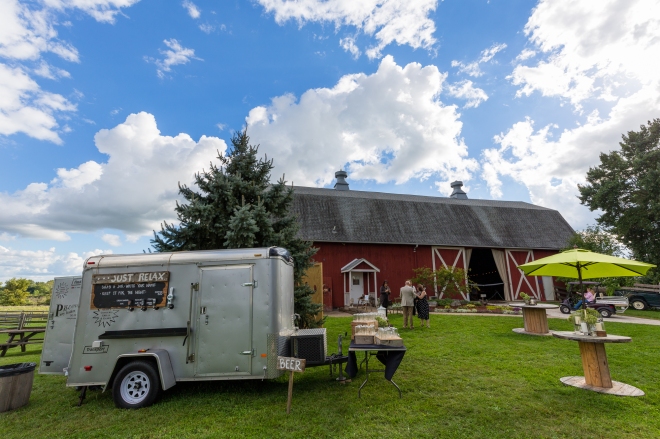 There was even jumbo Jenga!

The light looked to be warming for a brilliant sunset, but just before the ceremony the storms that had passed through the area decided they needed one more dousing. Fortunately, near the seating for the ceremony was the food tent, so after everyone (including bride and groom) got settled we ran into the tents for cover as the raindrops started.

The second take proved successful, weather and marriage alike (congrats, Kirk and Mackenzie!), and the weather held up beautifully for the rest of the evening. The light became more and more spectacular as the shadows grew longer. 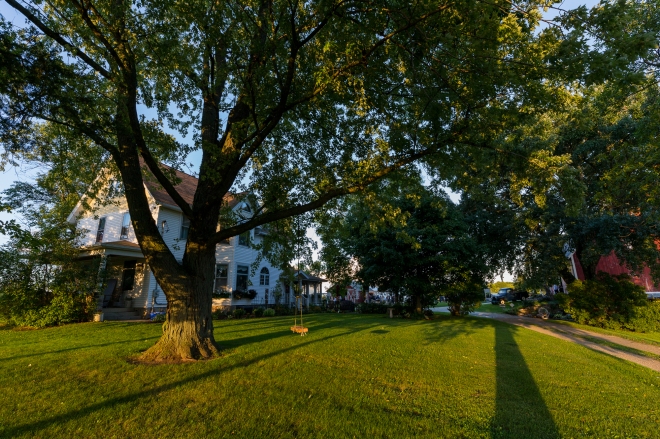 I was not the farthest guest to have traveled to this wedding: a friend of the groom flew in from South Korea! (Unlike my brainiac idea, he and his wife wisely did not spend less than 80 hours in the US; they coupled a vacation after the wedding.) Most other visitors arrived from other parts of the Midwest.

After the celebrations on Saturday, I slept in on Sunday and decided to venture to Milwaukee to check out its art museum. From the outside, it looks unlike most art museums I’ve seen, and I was curious to see if the contents inside matched the inspiring exterior.

At first glance, I was impressed. Under the giant sails is the lobby of the museum. With white marble floors and abundant sunlight, the space was inviting and clean but not blindingly bright.

The works themselves were no less impressive. I’m hardly an art critic — I “ooh” and “ahh” and that’s about the limit of my critiquing — but I would have liked to spend a full day looking at the paintings. A few (er, okay, a few dozen) caught my eye, with some simpler than others, but I had left myself only about three hours to explore the entire gallery. This is a downside of these long weekend trips: they don’t leave much time for actually exploring! Thankfully, the gallery was not full on a nice Sunday afternoon, which made photography inside and circling back to certain exhibits a breeze.

I happened to get my ticket just as a tour was about to start, so I joined the tour. Snapping photos can be rather thought-intensive, however, so comically I’ve forgotten most of what was said. Nevertheless, I do remember that one of the first exhibits we passed by was Cornelia Parker’s “Edge of England.” It features chalk pieces taken from a shoreline near Beachy Head in Sussex. 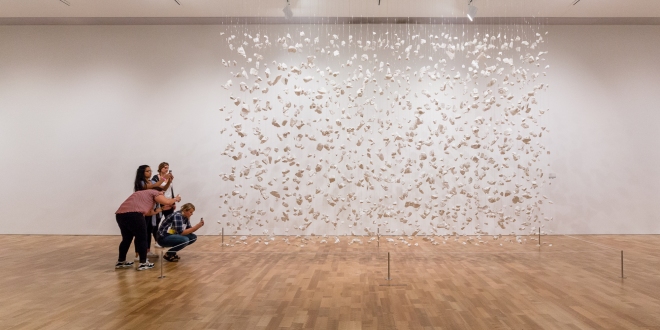 I was impressed by the intricacy of the installation. When renovating the museum, workers had to restring every single piece of chalk and line and relocate them exactly as they were before. While retracing my steps to leave the museum I came back to the work, where this time two museum employees were discussing it.

Near Parker’s sculpture were two exceedingly simple (and therefore elegant) works. I do remember the tour guide commenting at this point that he could have made it big, too, if he only thought to hang a picture of a hammer and the hammer next to each other.

Another was a set of instructions by a professor of art; the execution of the instruction, a massive work covering an entire wall, was completed by his students. Brilliant!

Certain other works were also muted though nevertheless bold.

There was also one room dedicated to statements on today’s culture — one sculpture made entirely of coffee cup lids, another of a shredded tire. 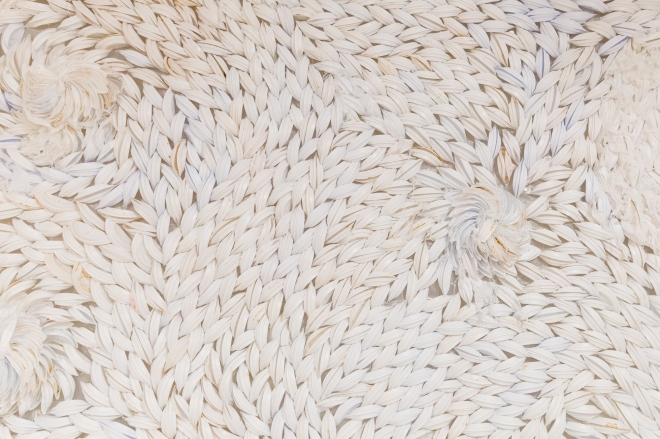 There were pieces that weren’t obvious societal elements, works whose statements seemed a bit darker. 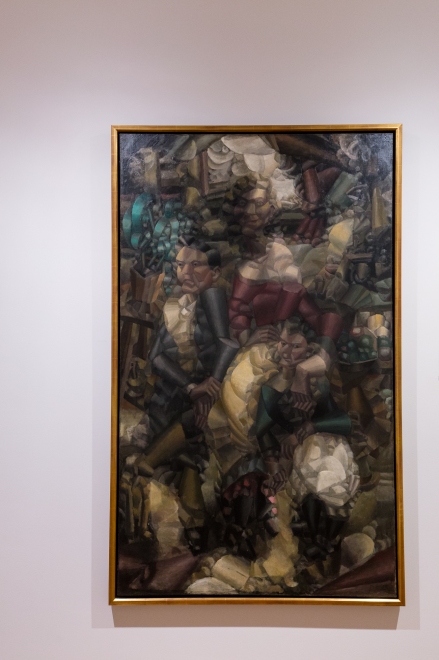 In between floors there was a sitting area, but without anyone there I’m not sure exactly what the function of the room was. 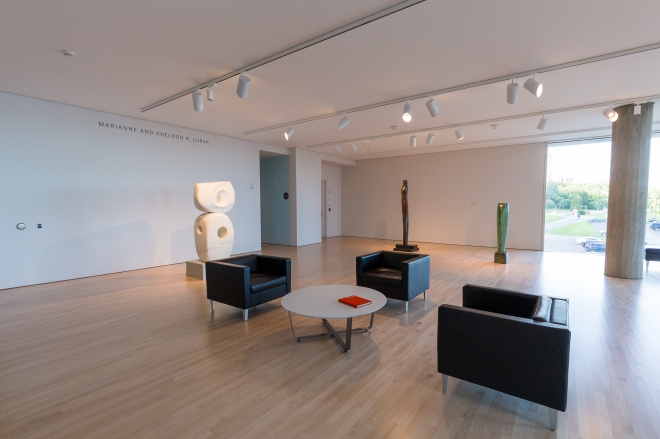 There was also a gallery dedicated to — for lack of the correct artistic reference — the American West. The art here was more realistic, the scenes more descriptive of actual events. 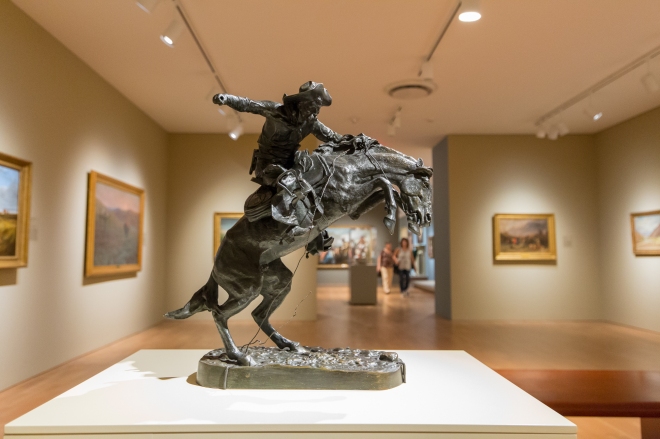 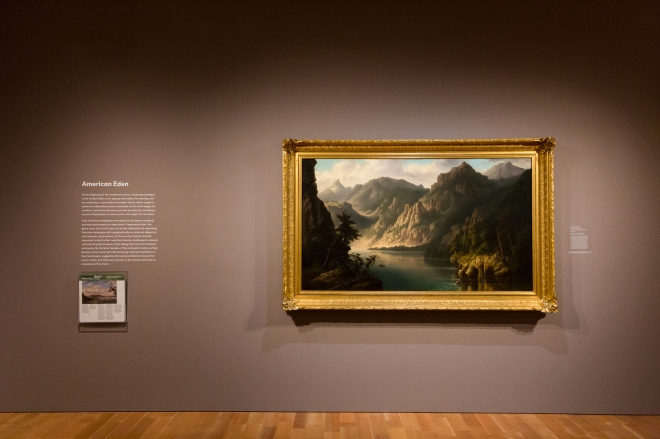 The museum  and its galleries was generally well-lit, and by about halfway in the tour I noticed how devoid of visitors it was on this day. (Arguably appropriately so; I visited on September 11, and outside the museum a ceremony was taking place.) Compared to the Louvre, being able to contemplate art quietly was generously appreciated. 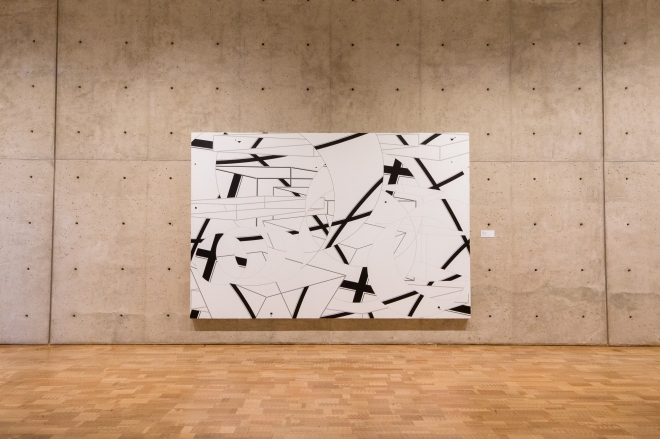 Every so often, I’d come across a few people other visitors, but it was a really quiet afternoon overall.

This gallery was one of my favorites. The works here were simple but yet not unrefined, and as with museums I’ve visited recently on a time-crunch I ran out of time here. My favorite from the museum hung by itself on a wall. Here again, during the tour I missed the description as I was behind by a couple rooms. The expression seems modern, which in the grand timeline of humanities it is: artist Paul Jenkins painted this, “Phenomena Blue Held Over,” in 1975. Jenkins poured paint directly on canvas, then shaping paint and canvas deliberately to achieve the end result.

The rooms in this gallery held my attention for a long time, and I looped through the gallery three times to try to take it all in. 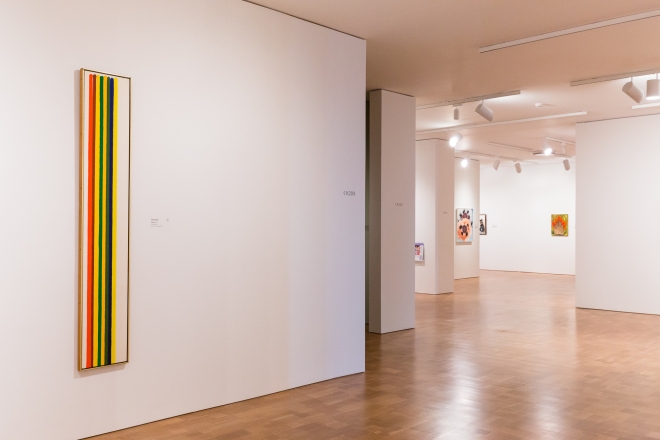 The work (Yaacov Agam’s “Union II”) at the end of the room was actually three-dimensional. When viewed directly head-on, it looked like a colorful abstract arranged into neat lines. But from the left it was shapes of magenta, brown, and orange; from the right, shapes of blue, purple, and green. If this were the Mona Lisa at the Louvre the other two angles likely wouldn’t have been possible to view!

I left the museum as its closing was announced fifteen and five minutes prior to the doors being shut, drove back to the hotel, and finished some work for the evening. I left Wisconsin and gradually made my way back to O’Hare, first stopping by the house where I had spent most of my childhood and then visiting a friend in Chicago for lunch. It was a beautiful autumn weekend, reminding me of football weather and pumpkins and home. Since high school, I still haven’t been consecutively in one place more than four years, and Chicago arguably still feels most familiar, even if I haven’t really explored its familiar touch in over a decade.

And so the weekend came to a close. I guess this is a part of my legacy from Charleston: a large part of the meaning and significance I attached to Charleston was work or work-related, and a large part of what I learned and practiced there was to keep plugged-in whenever necessary and unplugged for as short as possible. This experience of being able to unplug for an international trip over a weekend has carried over to my time in Germany: I have the ability now to take longer blocks of time off, but a large part of me is still used to going to places I feel familiar in in condensed time chunks. One or two of these multi-hour trips per year isn’t so bad, but after putting multiple together their cumulative effect is less relaxing and more exhausting. Next year, I suspect I’ll do what the Germans do and take fewer but longer trips.

But there’s still one more for this year, back to one of those S-places I so very much enjoy.

A home away from home