I thought Jeremy Clarkson was mostly joking when he made fun of automakers for having expensive accessories.

Until I visited the Ferrari museum in Maranello, that is. To the standard 13 € entrance fee you may add an audio guide, factory bus tour, and a large number of Ferrari-branded ornaments. Lots of bright, flashy stuff, but not quite as interesting as the Porsche museum. How did we come to be in Maranello, you ask? It all started last Monday with a double rainbow. Stuttgart itself is rather metropolitan, but just a half hour outside the city is a castle with a nice view of the lowlands around it. (Bosch Abstatt is visible from the castle biergarten.)

Having seen this scene — a vineyard in the foreground and two lazy rainbows in the background —  suffice to say Italy was the most logical destination choice (please see last paragraph), and so it was that we arrived in Bologna on Friday morning at 2:30. There weren’t a lot of tourists in Bologna during the day, 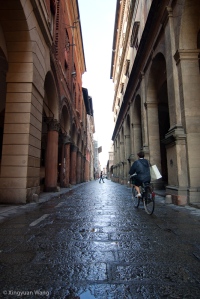 so we continued into Venice where there were.
END_OF_DOCUMENT_TOKEN_TO_BE_REPLACED