I thought Jeremy Clarkson was mostly joking when he made fun of automakers for having expensive accessories.

Until I visited the Ferrari museum in Maranello, that is. To the standard 13 € entrance fee you may add an audio guide, factory bus tour, and a large number of Ferrari-branded ornaments. Lots of bright, flashy stuff, but not quite as interesting as the Porsche museum. How did we come to be in Maranello, you ask? It all started last Monday with a double rainbow. Stuttgart itself is rather metropolitan, but just a half hour outside the city is a castle with a nice view of the lowlands around it. (Bosch Abstatt is visible from the castle biergarten.)

Having seen this scene — a vineyard in the foreground and two lazy rainbows in the background —  suffice to say Italy was the most logical destination choice (please see last paragraph), and so it was that we arrived in Bologna on Friday morning at 2:30. There weren’t a lot of tourists in Bologna during the day,

so we continued into Venice where there were.

A bunch of them decided to take various boat tours; we decidedly did not.

Of course, Venice isn’t only about canals… a lot of the city is interesting because it’s “above” the water line. (Of course this did make it difficult to navigate… thankfully one of us — not me — had a good sense of direction and a map.) 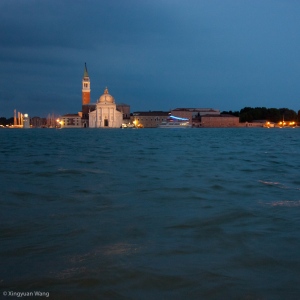 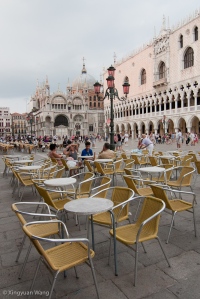 There were also some interesting design / decoration choices, like a makeshift door in a blocked entryway or a seemingly random, unorganized assortment of lights on a windowsill. 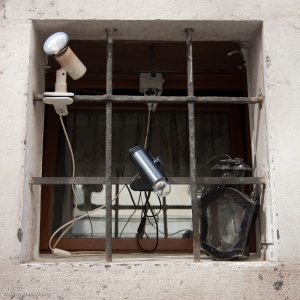 And naturally, to ward off tourists, there were lots of signs. (This was candid, believe it or not.)

Biggest takeaways? Well, I want to see more of rural Germany, for one. Italy drivers are insanely crazy, second. They make their own lanes but don’t do it with the franticness of Chinese drivers. Just don’t wait even a second after a stoplight turns green. They’ll let you know how frantic they feel then. Third, Italian food is quite good — but experiencing it as a tourist can get expensive. On the subject of expense, and fourth, maybe one day I’ll be able to experience Venice without as tight a spending ceiling (insert snarl here) as I set for myself this trip, and maybe that same day I’ll be able to afford to do this scene justice by taking the picture on a tripod — as night shots were meant to be taken.

Sixteenmillionth, a rainbow had nothing to do with our choice to go to Italy. It merely preceded the trip chronologically and I lumped that evening’s photo in with this [past] weekend’s photos. The rest of this blog post was pretty much factual and reported as intended. Unless I slipped up and said something wrong. Which is impossible.