Don’t get me wrong — a sunset isn’t “easy” in the sense that it doesn’t take preparation or that conditions are always perfect. But I am (and most people are) almost always awake at sunset. Sunrises, on the other hand, demand effort — to stay awake, to get up, to suffer through the rest of the day and week. And even then, it’s a crapshoot as to whether the sky will alight with the right clouds to reveal a colorful sunrise.

One week after the distillery and sunset at Edisto Island, I headed to the Boneyard at Botany Bay to see if I could get some pictures of the sunrise with the brooding trees in the foreground. Saturday morning looked to be clear, the tides were low, and I brought my bike with me so that the trek from the car to the beach took 1 minute instead of 10. The only thing I forgot was bug spray — and the sand gnats, noseeums, or whatever other aggravating pests are attracted to my Asian blood ate me alive.  Blue hour was tranquil, but the low clouds blocked the sun during the precious minutes where the blue twilight gives way to bursting clouds. It didn’t take long to recognize, though, how interesting the trees could be during sunrise. I don’t know if they represent stoicism or if it’s just their moodiness that’s so captivating at dawn, but even in death the trees give a sense of life to the morning. 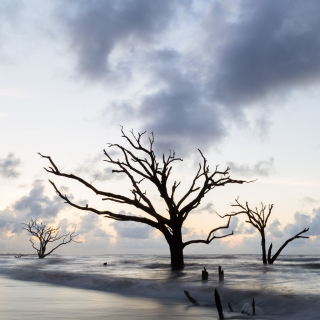 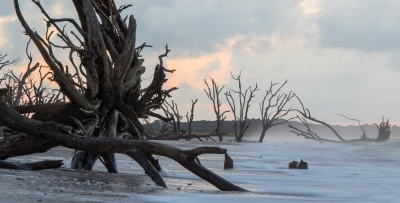 As the sun continued to rise, the sunbursts streamed through openings between the clouds as the tide slowly crept in — eventually splashing my camera with sea water and prompting me to bid farewell to the noseeums eating me alive. 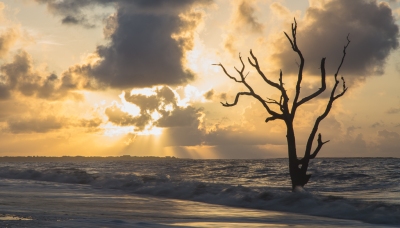 As I was going through my photos that night, I realized that the weekend was also the weekend of the Perseids. I had watched them in 2008 but didn’t bring a camera; this time, I decided to forego sleep coming into the workweek and head to Shell Ring Mound in Awendaw and join the local Meetup group for some meteor trails. Wanting to be at work early, I only stayed for half an hour and got exactly zero meteors on sensor, but I did see some and get to meet other photographers in the area. Definitely a success!

I have no real photographic preference for sunrise or sunset, but the allure of the sunrise is the peace that settles in just before the sky turns colorful. Few people know or revel in this solitude, but there’s something to be said about feeling insignificant in the world. Whether in the mountains or in the Lowcountry, that’s a calm that doesn’t always materialize during the evening hours. But who knows — my opinion might yet change, as the next Meetup event is a sunset on Shem Creek!

Because sunsets are too easy

2 thoughts on “Because sunsets are too easy”